A 39-year-old female patient who had aortic and mitral valve replacement due to rheumatic heart disease was also found to have cystic mass in the right ventricle on echocardiography during late routine control. The cystic mass identified on echocardiography was shown to be a pseudoaneurysm that develops from the membranous section of the interventricular septum and grows toward the right heart by ECG-triggered cardiac computed tomography performed for differential diagnosis. Because the patient did not accept the surgery, regular follow-ups were recommended.

Aneurysms of the membranous section of interventricular septum (IVS) are rare pathologies (1). Aneurysms of this part of septum are congenital and are in the form of true aneurysms, but a small number of aneurysms have been identified in the literature as pseudoaneurysm (2, 3).

The aim of this case report is to present a very rare case of developing of the pseudoaneurysm in the membranous part of IVS as a late complication after aortic and mitral valve replacement.

echocardiography was evaluated by ECG-triggered cardiac computed tomography (CT) in our clinic.

In 2018, echocardiography identified pulsatile cystic mass in the right atrium and right ventricle. This newly identified lesion had not been detected in the patient's previous echocardiography control. Physical examination and laboratory findings were  normal, sinus rhythm was present on the electrocardiogram.

The patient was evaluated with ECG-triggered cardiac CT. The contrast agent was carried out to be two-phasic for the examination. A bolus injection of 80 mL of contrast with an iodine concentration of 370 mg I/mL was administered at 5.5 mL/s, followed by mixture (70% saline + 30% contrast agent) bolus of 5 mL/s by using a power injector with 18G intravenous needle in the right antecubital vein. The images were obtained with 160 detector CT devices (Aquilion; Toshiba Medical Systems, Tokyo, Japan) with a retrospective ECG trigger to include all cycles of the heart (systole and diastole). Then volume rendering (VR), maximum intensity projection (MIP), multiplanar reconstructions (MPR) and sine images were analyzed at the workstation (Vitrea; Vital Images Inc, Minnesota, USA). A pseudoaneurysm with a narrow neck, lobule and two separate segments in the membranous region of the IVS was detected at the short-axis (two chambers) and long-axis (four chambers) images of the left ventricle (Fig. 1 A-C). The pseudoaneurysm’s total size was 27x55 mm, and it was showing growth towards the right atrium, also aortic and mitral metallic prosthetic valves were present. The pseudoaneurysm lumen was empty and no thrombus formation was detected in i

Surgical treatment was recommended but the patient did not accept this treatment due to the risks of complications. It was therefore decided that the patient should be followed up with anticoagulant treatment.

Aneurysms of the IVS membranous part are rare pathologies that account for 0.3% of congenital heart diseases (4). According to their etiology, they are divided into two types: congenital and acquired. Acquired IVS aneurysms are pseudoaneurysms, which develop secondary to surgical intervention (valve replacement) or trauma. Only two case reports have been published in the literature (2, 3).

IVS consists of two parts (membranous and muscular) with different histological characteristics. The membranous part of IVS consists of fibrotic tissue and is less resistant to pressure (5). In patients with mitral valve surgical replacement, the left ventricular wall can be damaged and separated from the fibrous skeleton during surgery. This can cause pseudoaneurysm in the subannular part of the left ventricle free wall (6). In our case, it was determined that a pseudoaneurysm developed in the IVS membranous septum, unlike the one expected. Although there is not enough literature on this subject, we estimate that this part of IVS was damaged during surgery in our patient with a history of aortic and mitral valve replacements and that the part of IVS was damaged due to the formation of fibrous tissue and pseudoaneurysm development in the long period.

Clinical signs of IVS aneurysms develop secondary to complications (pulmonary valve stenosis, thromboembolism and arrhythmia) that develop as a result of pressure or rupture of aneurysms (7). Echocardiography, contrast CT and magnetic resonance imaging (MRI) are methods that can be used as imaging modalities for IVS aneurysms. Echocardiography has disadvantage due to the inability to provide the appropriate acoustic window for displaying the posterior structures of the heart. ECG-triggered cardiac CT and MRI allows better evaluation of anatomical details in 3-D high-resolution images. In addition, as recently introduced, dynamics and functions can be evaluated in phase contrast at ECG-triggered cardiac MRI (8).

Treatment methods of true aneurysms are chosen according to presence or absence of complications. In a patient in whom complications develop, surgical excision is applied and in other patient, anticoagulant treatment can be administered. Pseudoaneurysms have a higher risk of rupture because they do not contain a real wall structure, so the surgical treatment should be the first option for patient without considering the development of complications (8). 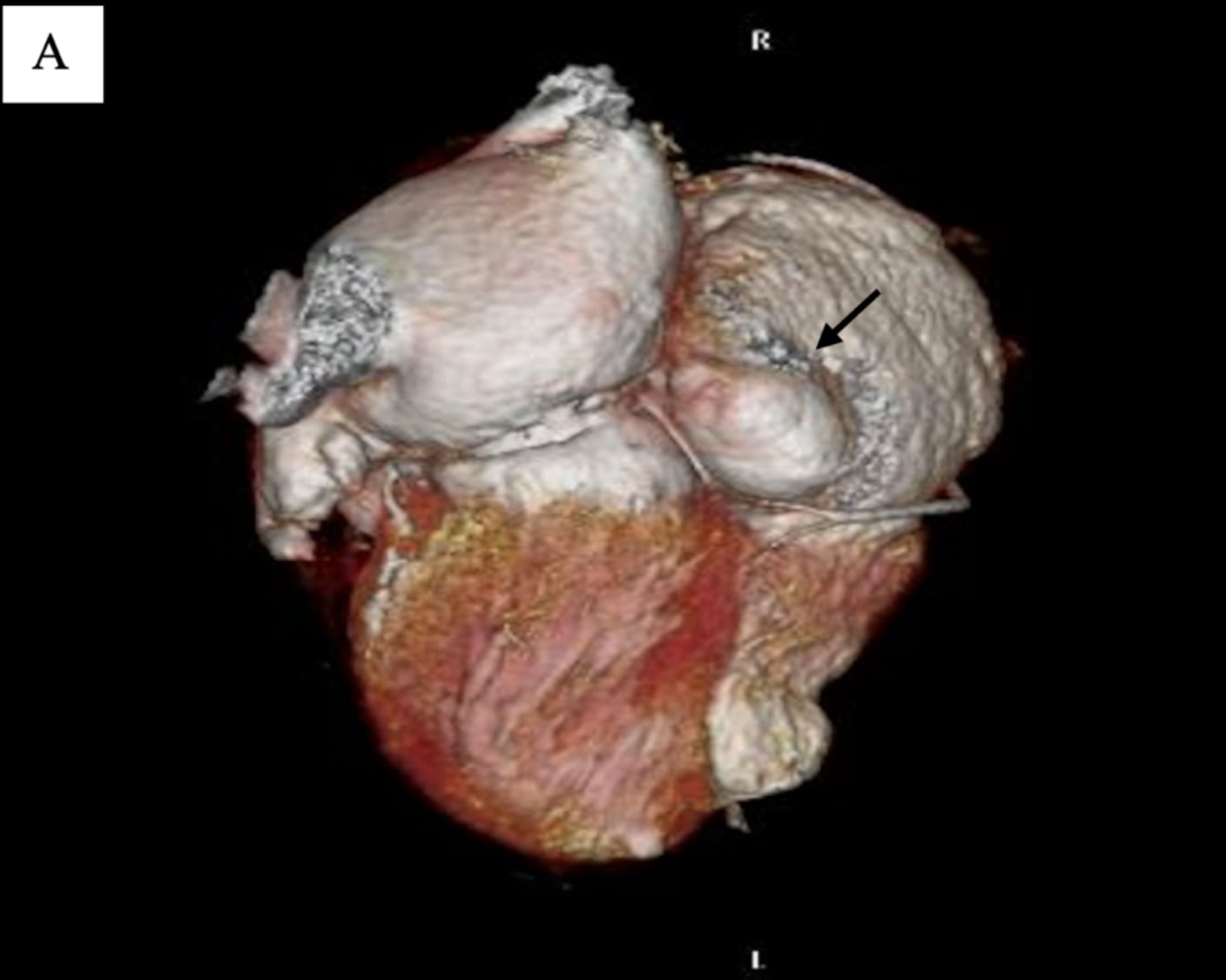 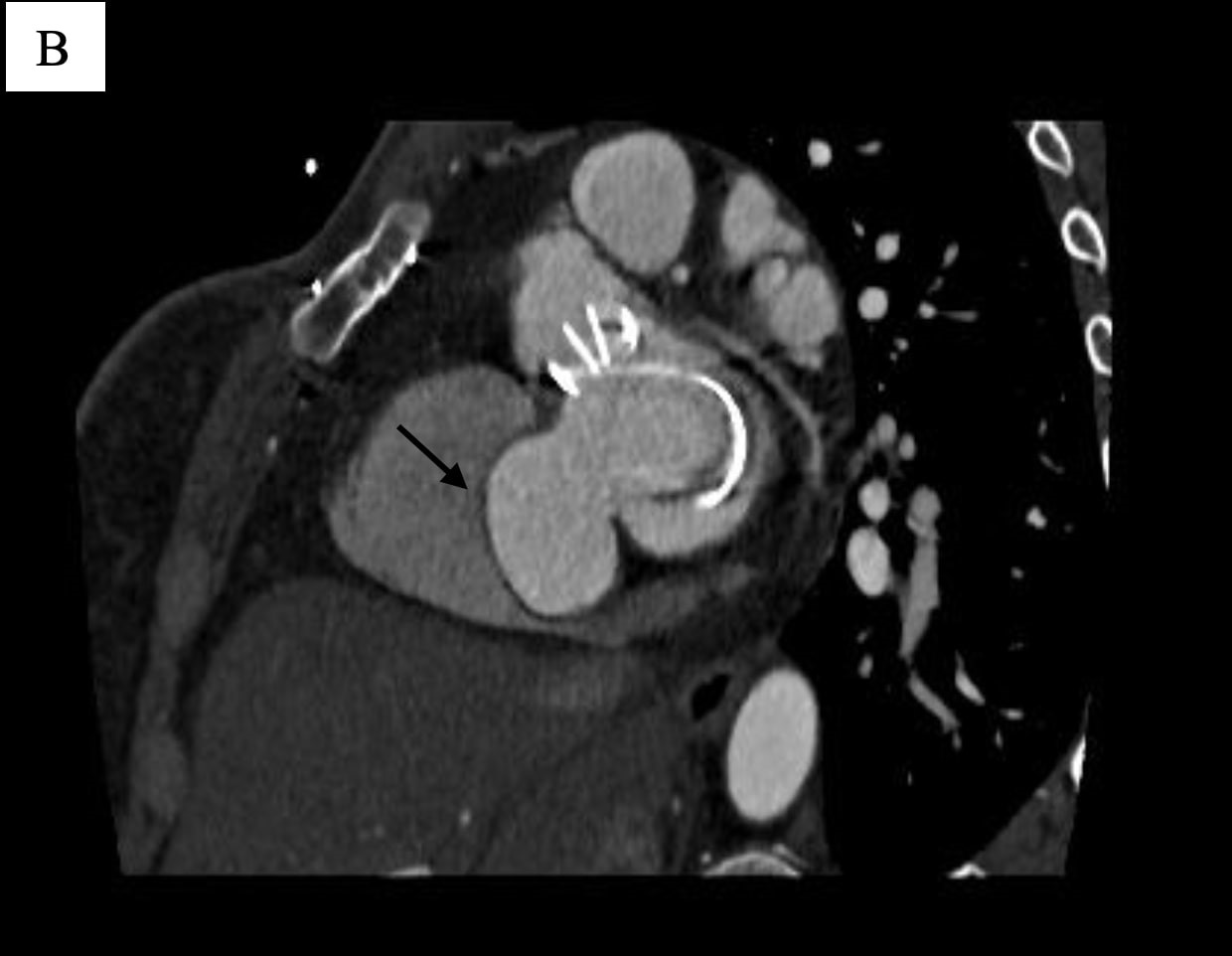 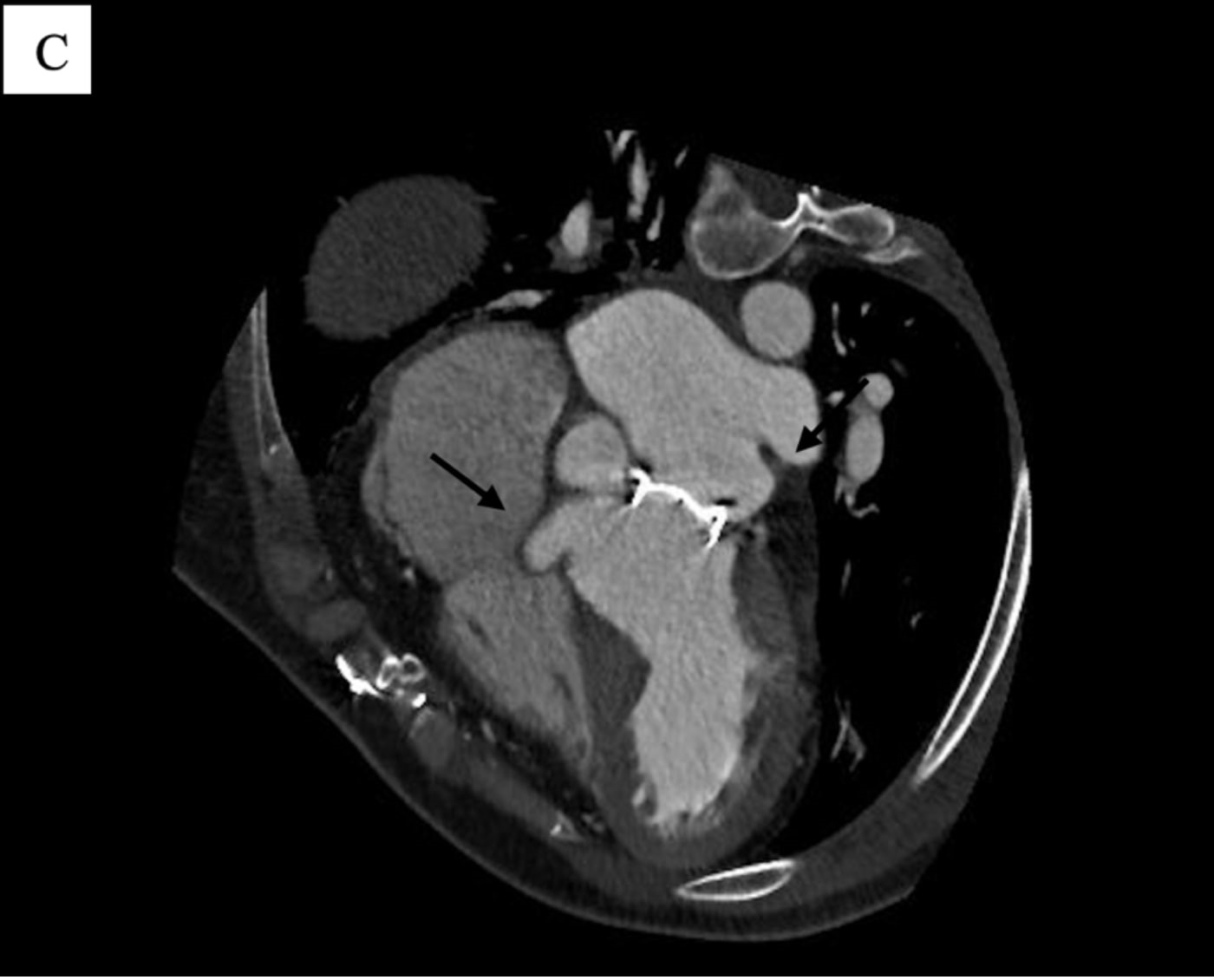 Because the membranous part of IVS is a sensitive area for surgical interventions or traumas, pseudoaneurysm may develop in this part of IVS in patients with history of surgery at the long term. In addition, ECG-triggered cardiac CT or MRI should be used for the imaging of these anatomical structures.