Conclusion:     According to results of our study, combined surgical interventions especially those performed from a single surgical approach, slightly increase the severity of the operation compared to isolated interventions performed for the same underlying diseases.

The contemporary achievements of surgery and anesthesiology enhanced the feasibility of combined operations as extensive and complex interventions (1-14). According to literature review, proportion of patients with two or three concomitant surgical pathology counts for 20-30% and possess a tendency to increase (2, 7, 12). Despite the wide variety of  trials devoted to etiological factors of combined surgical diseases, few investigations on operative management options exist and vast majority of these studies are controversial (2,9).

The management of concomitant surgical diseases requires the solution of two consequent issues: which method is preferred in accordance with preoperative risk assessment: multistage or simultaneous tactics and after the decision-making establishing an appropriate time for carrying out of a chosen intervention (3, 10).

According to our retrospective analysis, the simultaneous interventions are implemented in clinical practice extremely rarely, which do not fulfill their real requirements. This issue is explained by several reasons: incomplete examination of patients in the preoperative period,  insufficient intraoperative revision of the abdominal and pelvic cavities, overstatement of the operational risk when determining the possibility of performing simultaneous operations, the habitude of surgeons to perform multistage treatment  of combined  diseases, increased responsibility of the surgeon in case of possible unsuccessful outcome, technical and psychological unpreparedness of surgeons, gynecologists and anesthesiologists for extensive intervention (4,5,13).

Surgical treatment of patients with combined pathology requires a specific approach, both in preoperative preparation and in intra- and postoperative management. In advance determination of operational scope and arrangement of the operating team for extensive intervention depend on detailed preoperative evaluation of patients. Thus, consultation of gynecologist and risk assessment of anesthesiologist are obligatory before planning the operation strategies and scope of intervention.

The operational access has a leading role in a combined emergency surgery, because of its contribution in defining the extension of operation and appropriate patient selection. The extremely important point in decision-making of simultaneous operation is that, the risk of intervention should not exceed the risk of the disease itself.

The development of postoperative complications and their physical assessment remain challenging in daily practice of surgery (5, 7, 8). Currently the combined operations are frequently associated with fatal complications (2, 6, 12).

The challenge of objectivity is found frequently in operational risk assessment, as long as the doctors do not evaluate the risk parameters equally. Often the necessary preoperative assessment is carried out by individual opinion.

We understand the operative risk as the degree of presumed risk for patient during surgical operation and anesthesia.

The workup of unified criteria for prognosis of complications and mortality in case of combined surgical pathology remains challenging due to irresistible contradictions of two or three incomparable pathologies and enormous difficulties in combined surgery.

The aim of our study is analysis of surgical outcomes of 123 patients with combined surgical and gynecological diseases depending on the operational and anesthetic risk.

We conducted retrospective study from January of 2014 to December of 2017 in surgical department of Osh Interregional United Clinical Hospital. Overall, 346 female patients with combined surgical and gynecological conditions were enrolled into study.  The main group consisted of 123 women underwent simultaneous operations, the control group had 223 patients underwent multistage surgery of abdominal and pelvic organs.

Criteria for inclusion of patients to the study were patients with a gallstones, appendicitis and abdominal hernia with combined gynecological pathology of pelvic organs diagnosed pre- and intraoperatively.

In general, the groups were statistically comparable in age and frequency of comorbidities.

Operations in both groups were performed by generally accepted conventional methods.

Access to the hepatobiliary organs was carried out in the right hypochondrium by an oblique or transverse incision of the skin, subcutaneous tissues, superficial fascia, right rectal abdominal muscle and partial incision of right abdominal flat muscles, intraabdominal fascia and peritoneum. Peritoneum incisions were isolated with sterile towels.

Appendectomy was performed through McBurney (Volkovich-Dyakanov’s) approach (15). Hernia repair was performed by generally accepted accesses depending on localization.

Access to the genitalia was carried out according to Pfannenstiel by cross dissection over the skin of suprapubic zone, subcutaneous tissue, superficial fascia, anterior duplicates of vagina of abdominal rectal muscles, partial incision of aponeuroses of the external oblique muscles and subsequent longitudinal dissection from the umbilicus to the pubic symphisis via the linea alba, and eventual opening of visceral fascia and peritoneum.

Risk is evaluated according to ASA physical status assessment system (16). 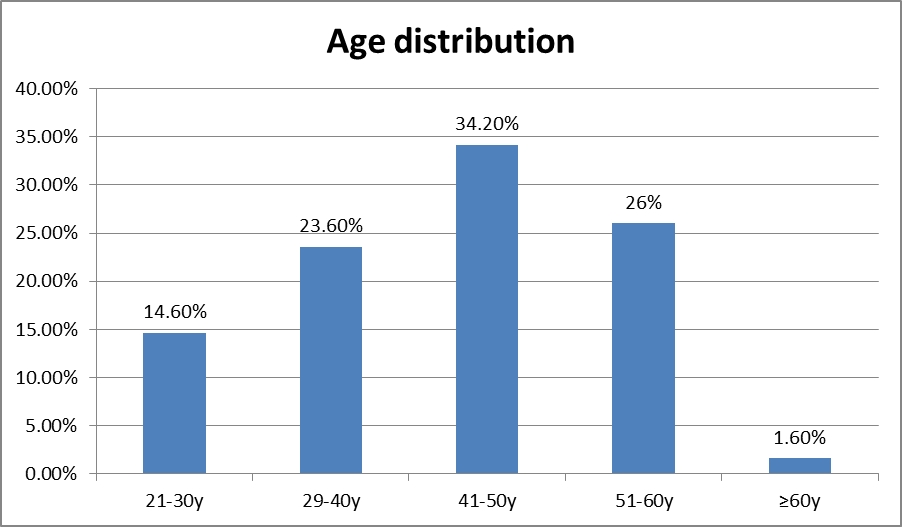 Figure 1. Distribution of patients according to age.

The 14 patients (11.4%) had concomitant cardiovascular and respiratory diseases, which required through preoperative preparation.

Distribution of patients according to character of combined surgical and gynecological diseases is presented in Table 1 and Figure 2. 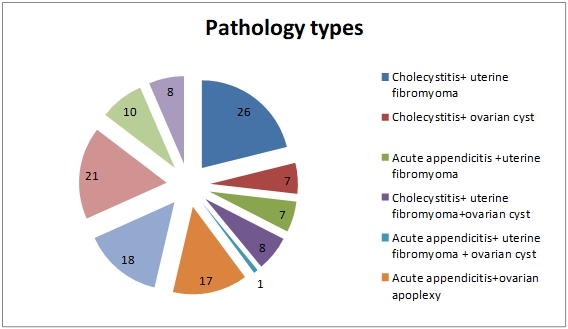 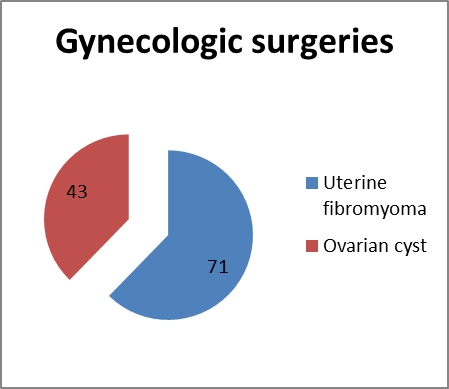 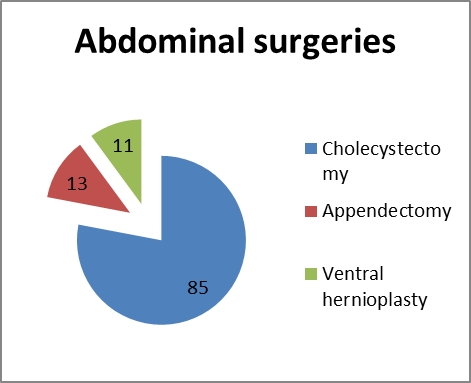 The complications developed in 10 (8.1%) cases among 123 patients encountered combined surgery (Table 2).  All complications were associated with the main stage of simultaneous operation.

In the control group, earlier postoperative complications were observed in 16 (7.1%) cases.

Our study is not directed to evaluate a certain preoperational parameter of risk assessment, such as advanced age, cardiovascular comorbidity or parity status of gynecological patient.

In further works, we are planning to concentrate on analysis of postoperative complications depending on certain parameter.

In this study, only open surgeries are included, but in next surveys, we also take in account endoscopic procedures.

According to the retrospective analysis and the study of prognostic indicators, we concluded that, combined operations are contraindicated for patients with high and extremely high degree of operative-anesthetic risk; therefore, they should be planned to multi-stage operations. All postoperative complications emerged due to underlying disease, advanced age and presence of cardiovascular and respiratory comorbidities. Despite the development of various postoperative complications and moderately increased effort for the surgical team, combined operations must be implemented in clinical practice according to feasibility of appropriate conditions: patient commitment, well-trained and psychologically prepared surgeon, complete preoperative investigations, adequate operative-anesthetic risk assessment, and sufficient revision of cavities.

According to results of our study, combined surgical interventions especially those performed from a single surgical approach, slightly increase the severity of the operation compared to isolated interventions performed for the same underlying diseases.

Simultaneous operations are not associated with severe operational complications, which could be an expected feature of solely this type of operation.