Types and Structure of Complications, and Causes of Mortality with Different Combinations of Immunosuppressants in Patients of Undergoing Organ Transplantation

Types and Structure of Complications, and Causes of Mortality with Different Combinations of Immunosuppressants in Patients of Undergoing Organ Transplantation

One of the important problems of modern transplantology is the creation of combination of immunosuppressants having the lowest possible toxic effects on the body of the recipient. The most frequent variety of infectious complications, sometimes reaching to sepsis and lethal outcome in patients receiving immunosuppressants (1-10).

Many modern immunosuppressants effectively suppress the immune system of recipients after transplantation of vital organs, but also affect other organs, causing hypo-and aplasia of the bone marrow with the progress of agranulocytosis (7-10).

In remote period in patients receiving immunosuppressants, carcinogenic and teratogenic side effects may develop (7-11).

All these factors force to seek new combinations of immunosuppressants in dosages that provide sufficient suppressive effect, avoiding toxic effects.  The most common cause of reduced graft function and occasionally recipients’ mortality during the first year after transplantation is infection, especially cytomegalovirus infection (CMV). Cytomegalovirus infection may be primary and associated with the reactivation of the virus in a recipient with positive results of serological tests as a consequence of immunosuppressive therapy. Approximately 90% of patients are able to cope with infection, and they do not have any symptoms, but in 5-10 % of cases, it leads to death (7-10).

We aimed to retrospectively analyze and present preliminary results on the effects of immunosuppressive therapy (tacrolimus and cyclosporine with mycophenolate mofetil and mycophenolic acid) on morbidity and mortality after kidney and liver transplantation in cohort of patients being followed-up at our institution.

We retrospectively analyzed records of 228 patients who underwent organ (kidney - 178 and liver – 50) transplantation between 1999 and 2017, received immunosuppression therapy and have been followed up in our clinic.

The following data were collected: type of immunosuppressive therapy, proportion of acute rejection, overdose, cytomegalovirus and candidiasis infections, and mortality, countries where patients underwent kidney transplantation and rate of return to hemodialysis.  Survival analysis was based on 1-5-10 -year follow-up data.

The table 2 shows the causes of complications in different combinations of immunosuppressants.  Complications were common in combination of cyclosporine and mycophenolate mofetil, and mortality was 14.3%. Analysis results are also clearly shown in the Figure 1. 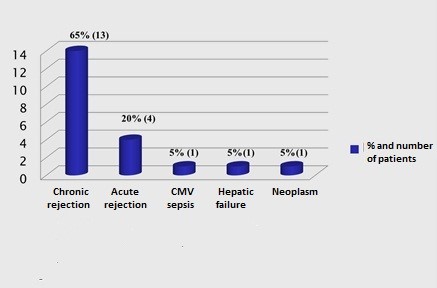 Figure 2. Causes of mortality in patients on immunosuppressive therapy  after organ transplantation 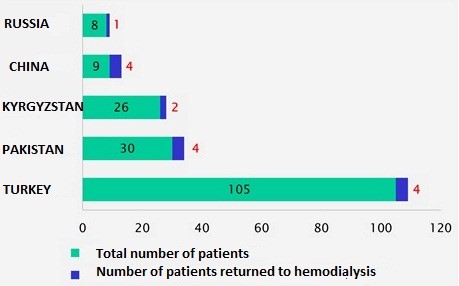 There were identified cases of acute and chronic rejection of different degrees at early stage, that was successfully managed with drugs in 17 (11.2%) of patients after the transplantation of kidney.

Figure 4. Survival of grafts and patients

Our study has limitations as being descriptive in design and includes relative small number of patients.

In conclusion, the overall graft survival of patients who underwent kidney and liver transplantation from 1999 to 2017 was 84.2%. Combinations including cyclosporine, were associated with high rate of complications acute rejection, CMV and candida infections as compared to tacrolimus. The most unfavorable in terms of mortality was combination of cyclosporine – mycophenolate mofetil.

Authorship: J.A. and J.G. equally contributed to the preparation of brief report

Acknowledgement and funding: None to declare.