A 68-year-old patient with history of recent coronary artery bypass surgery (CABG) was admitted to our hospital with incessant monomorphic ventricular tachycardia (VT) and was treated successfully with radiofrequency catheter ablation (RFA). A new electrophysiological study 3 months post ablation induced no arrhythmia and no implantable cardioverter- defibrillator (ICD) was implanted.

Sustained ventricular arrhythmias are uncommon complications after CABG (1-3%) but are life- threatening and affect outcome (1).  Patients who present with ventricular fibrillation or polymorphic VT in the early postoperative period more often have myocardial ischemia and infarction, acute graft closure or other potentially reversible causes, such as hemodynamic instability, electrolyte imbalances, hypoxia, hypovolemia and use of inotropes.

We describe a case with new-onset VT after CABG related to old myocardial infarction scar and treated successfully with ablation.

A 68-year-old male was admitted to our department with a hemodynamically stable VT (Fig. 1). On arrival, he was alert, complaining of no chest pain or dizziness apart from palpitations. On examination, pulse rate was 130 beats /min, blood pressure was 110/70mmHg and chest auscultation was clear. Blood test results and arterial blood gas were within normal limits apart form a marginal elevation of troponin I, whereas chest X-ray revealed nothing remarkable.

Figure 1. Electrocardiogram on admission shows a wide complex tachycardia: ventricular rate of 130 beats per minute,  QRS complexes of a right bundle branch block morphology with positive concordance all over the precordial leads and left axis deviation supporting the diagnosis of VT

Our patient underwent a CABG three weeks ago due to a non - ST elevation infarction (NSTEMI) and severe multivessel disease on coronary angiogram (Fig. 2 A, B, C). A left internal mammary artery was grafted to the left anterior descending coronary artery and two vein grafts to the circumflex and obtuse marginal artery. The cardiac echocardiography at discharge estimated a left ventricular ejection fraction 45% with akinetic basal and mid-inferior and inferolateral walls. He was already on aspirin 100mg, clopidogrel 75mg, bisoprolol 5mg, ramipril 5 mg, atorvastatin 40mg and pantoprazole 40mg once daily.

A wide complex tachycardia in a patient with known coronary artery disease should be managed as ventricular tachycardia until proven otherwise. In our case, ECG fulfills a few traditional criteria of VT such as positive concordance in all precordial leads, right bundle branch block pattern with left axis deviation and initial R in aVR lead (2).

Pharmacological attempts with intravenous magnesium, procainamide and amiodarone failed to terminate VT. Electrical cardioversion was performed without success because the arrhythmia was reinitiated immediately after VT termination. Treatment with amiodarone IV was continued and oral mexiletine was added. A new coronary angiogram showed that the grafts were patent. After 48 hours, tachycardia did not respond to medical treatment and the decision to proceed to RFA was made.

The ablation procedure was performed using the Carto-3 mapping system (Biosense, Webster) under general anaesthesia. The patient had hemodynamically stable VT from the beginning of the procedure. Left ventricle was accessed through an arterial retrograde approach. Electroanatomical mapping was performed with manipulation of PENTARAY catheter (Biosense Webster, USA). Lesions were applied with 3.5mm ablation catheter (ThermoCool SmartTouch, Biosense Webster), with 35Watts at a flow rate of 30ml/min for 60-120 sec, minimum force 7g (range 7-40g), aiming for an impedance drop of 5-10 Ω. Scar was defined as cut-off value <0.5 mV with border zone set at  0.5-1.5 mV. After activation mapping of the left ventricle, isolated mid-diastolic potentials were recorded in the posterior wall (Fig. 3). Isolated diastolic potentials are discrete signals inscribed after the end of the QRS complex, and separated by an isoelectric segment, they indicate areas of slow conduction bounded by anatomic arcs of block. RFA delivered to this specific site, terminated VT within 6 seconds (Fig. 4). Substrate modification was performed in the area of the basal-posterior wall and in the end of the procedure the VT was not inducible. We decided not to implant an implantable cardioverter defibrillator (ICD) and the patient was set to close follow up.  A new electrophysiological study was performed 3 months later and the arrhythmia was not inducible. 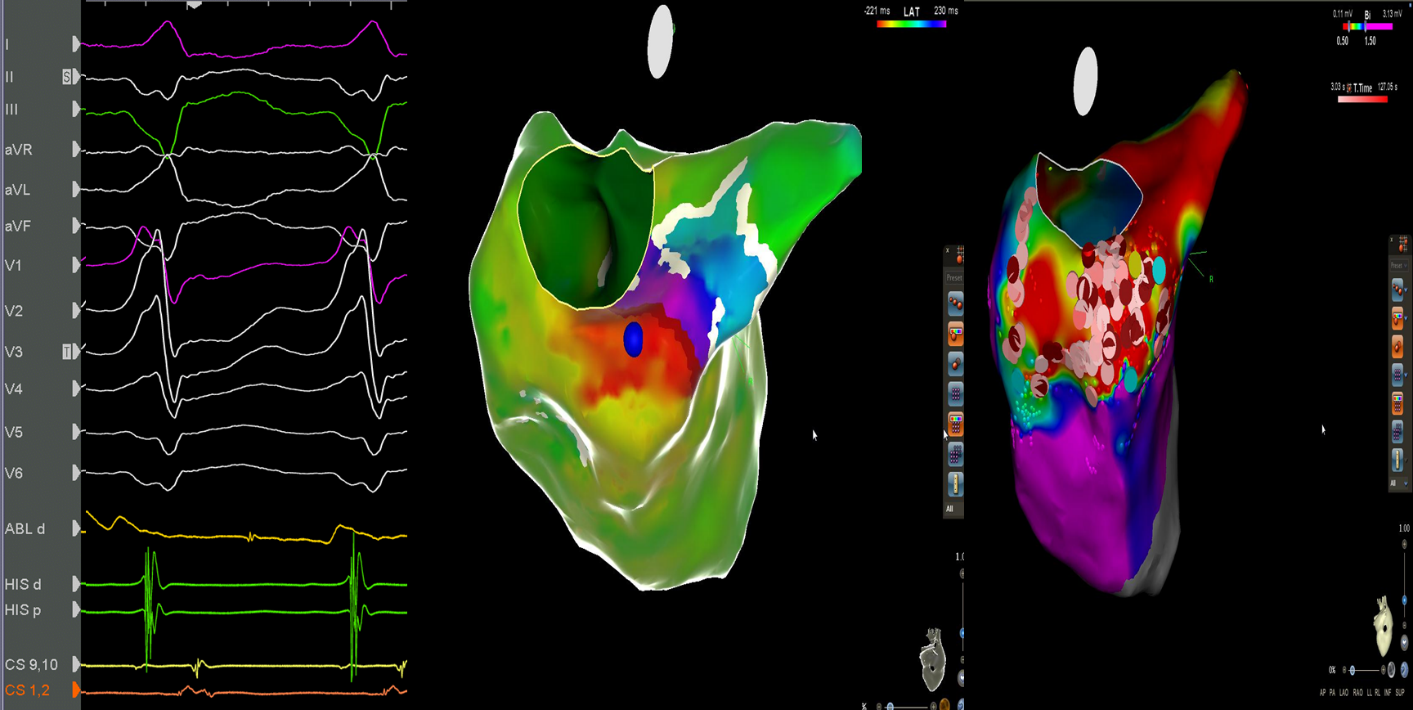 Ventricular tachycardia after CABG is uncommon and usually are related to transient reversible causes or ischemia, acute infarction or loss of graft patency (1).

On the contrary, new-onset monomorphic VT after bypass surgery is associated with old infarct scarring and may, in some cases, be due to revascularization of an area of prior infarction (3). These patients likely have a substrate capable of supporting macroreentry, specifically myocardial scar caused by infarction, harboring protected isthmuses of surviving slowly conducting myocardial tissue. Risk factors for occurrence of monomorphic VT after CABG are left ventricular dysfunction, prolonged pump time during surgery and prior myocardial infarction (4, 5). Placement of a bypass graft across a non-collateralized total occlusion in a vessel supplying an infarct zone was strongly and independently associated with the development of VT (6). It has been assumed that revascularization of an infarct zone may induce abnormal automaticity of surviving Purkinje cells at scar borders. Some studies reported also unstable angina at baseline, female sex and chronic kidney disease as risk factors for postoperative ventricular arrhythmias (1, 5). 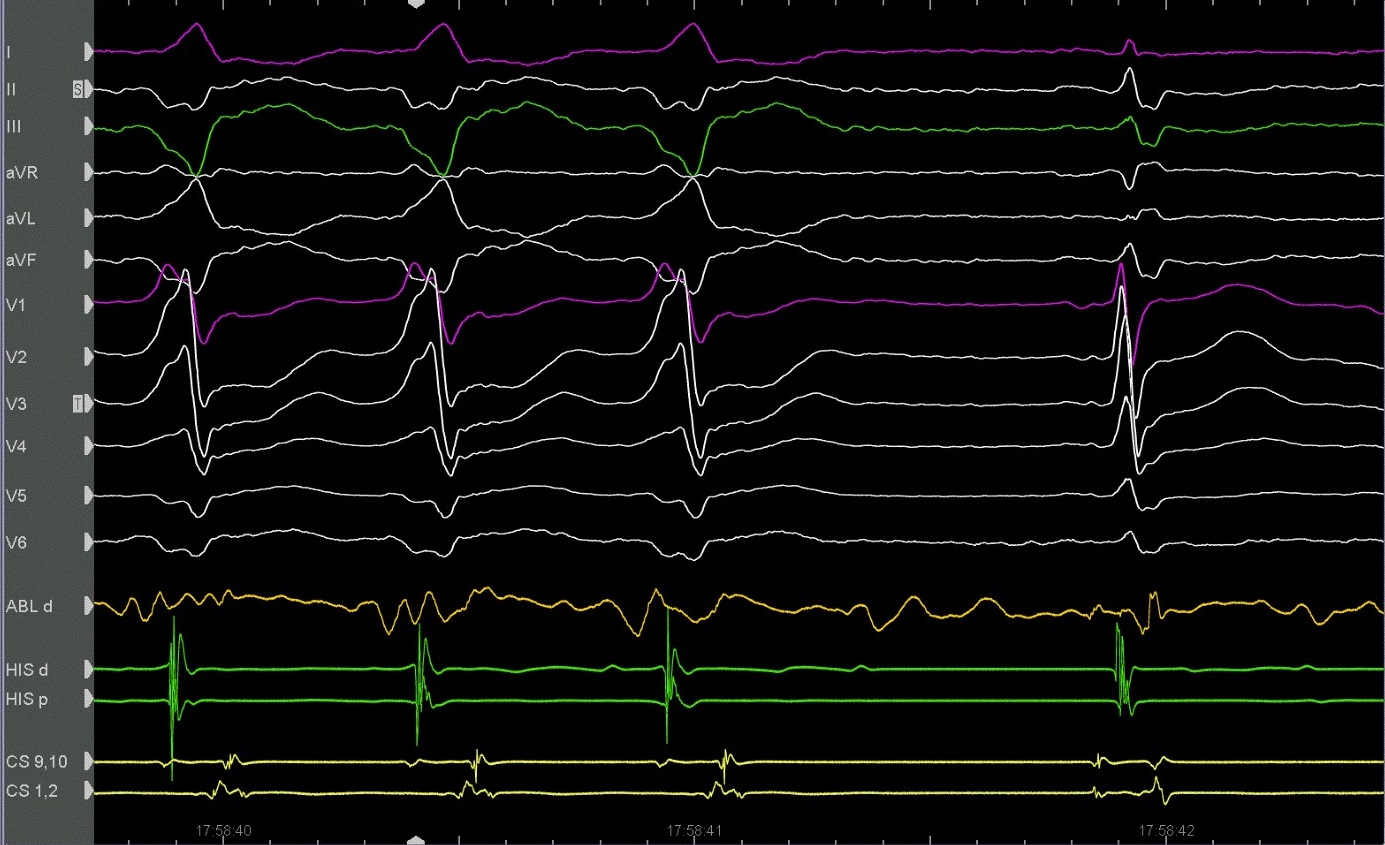 Postoperative sustained ventricular arrhythmias treatment follows the indications used in other clinical settings and should be promptly cardioverted either by antiarrhythmic drugs or electrically (7). The role of ICD implantation is controversial, because all the major trials excluded this patient population (8). Patients with non-sustained VT after CABG and inducible sustained VT in electrophysiological study may benefit from an ICD (9).  However, ICD is not indicated in a patient with incessant VT or electrical storm. Pauriah et al (10) also described a stepwise approach to the management of VT with ablation alone as first line treatment in postinfarct patients presenting with VT. They found that the mortality rate in the successful ablation group defined as non-inducible VT at the end of the procedure was not higher than the ICD group.

We performed a new electrophysiological study 3 months after the successful ablation and no VT was inducible. In view of the above, we optimized our patient medical treatment by adding amiodarone and decided not to implant an ICD.

Although catheter ablation is well established as therapeutic option for incessant VT in postinfraction period, there are only a few reports of treating ventricular arrhythmias in the post-cardiac surgery period with RFA (11). Re-entry along the infarct border zone, as in our patient, may be responsible for resistant or refractory to medical treatment cases. These arrhythmias in postoperative period after CABG can be treated successfully with RFA.

Our patient remains asymptomatic and free of arrhythmic events 12 months after the last electrophysiological study.

New onset monomorphic VT after CABG is associated with an old infarct scar and is usually resistant to medical treatment. RFA may be an efficient therapeutic option in this setting. Electrophysiological study can be used as a marker to stratify the best candidates for ICD implantation. 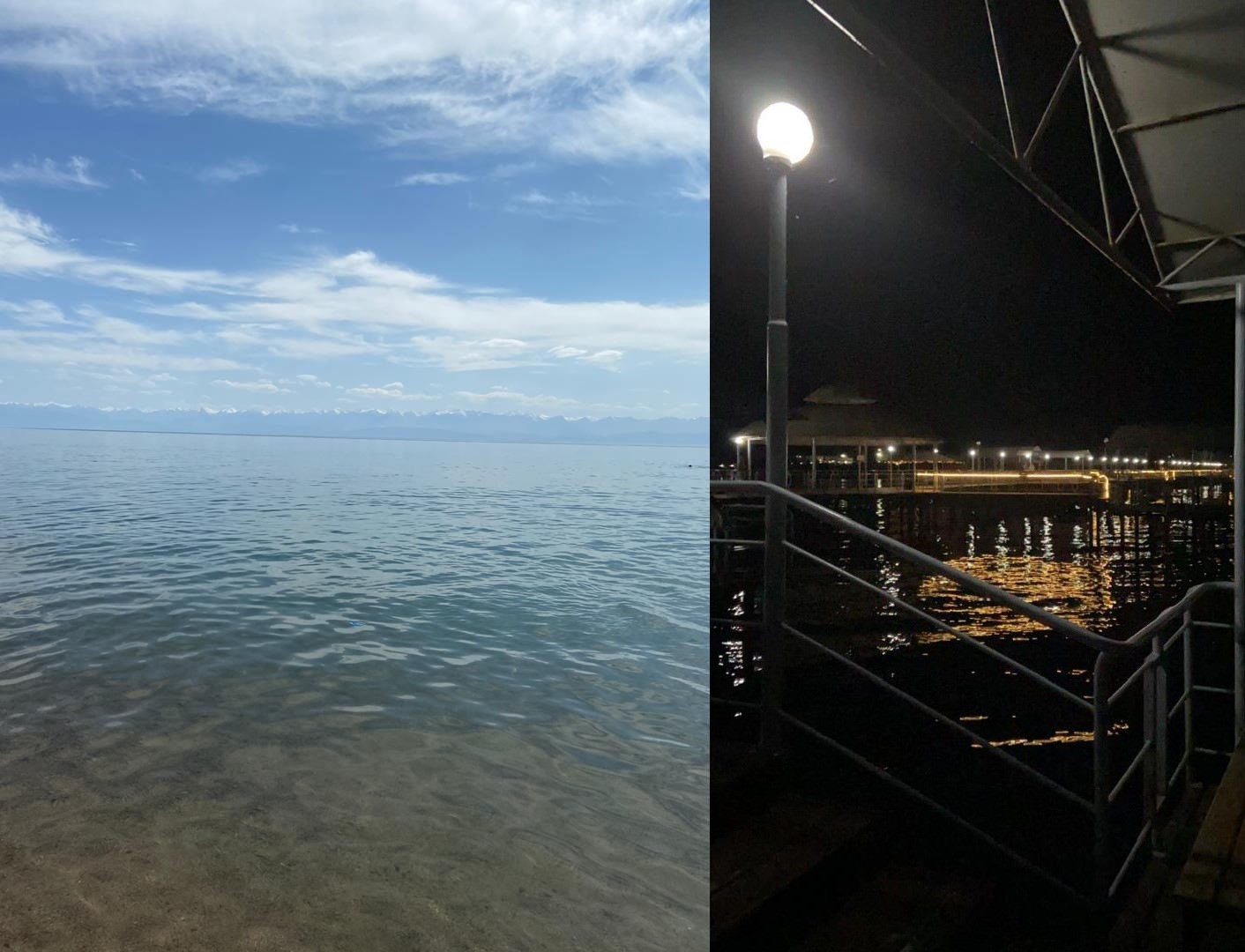