His-bundle pacing (HBP) appears to be a viable stand-alone or adjunctive physiological pacing therapy in pacemaker dependent patients. It could also serve as an effective adjunct or alternative pacing therapy for heart failure patients who require cardiac resynchronization therapy or pacemaker upgrade. His-bundle pacing has demonstrated improvement of His-Purkinje conduction, left ventricular electrical / mechanical synchronization, and left ventricular ejection fraction (LVEF) compared with right ventricle pacing. Patients who have high pacing dependence and/or LVEF impairment would benefit most from HBP in terms of heart failure hospitalization and LVEF improvement. Mortality benefit has not been consistently demonstrated in latest meta-analysis. The long-term clinical benefit and safety profile of HBP remains to be explored in future studies.

His bundle pacing is a physiological pacing technique aiming to preserve the electrical conduction of His-Purkinje system and ventricular mechanical synchrony by selectively or non-selectively pacing the His bundle area. It was first reported by Deshmukh et al (11) in 2000. Among patients with chronic AF and dilated cardiomyopathy with narrow QRS complexes, HBP was associated with left ventricular reverse remodelling and improvement of LVEF from 20±9% to 31±11% (p=0.01) (11). Over the past few years, HBP has evolved into both a stand-alone physiological pacing therapy or as an adjunct to CRT.

The objective of the review is to evaluate the implant success rate, long-term safety and clinical benefit of HBP in HF patients requiring CRT and non-heart failure patient with pacing indications.

A comprehensive literature search was conducted in PubMed (including Medline) online database.

Literature search was performed using the key word “His bundle pacing” in PubMed (including Medline).  Journal articles published between 1st January 2000 to 8th March 2021 were included.

HBP as an adjunct therapy to CRT in heart failure patients 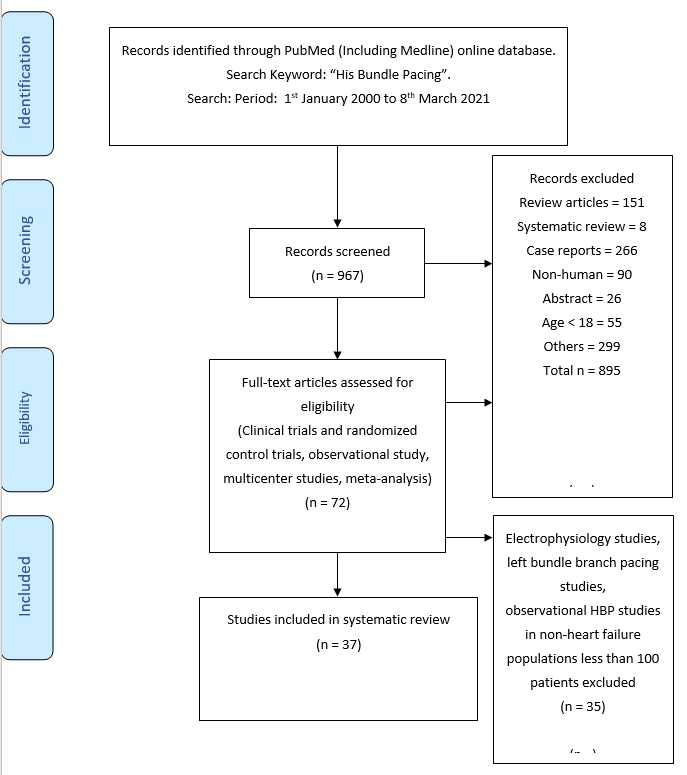 There were 2 randomized control trials (RCT) studying the effect of HBP as an alternative to CRT. The first single-blinded RCT was conducted by Lustgarten et al. (1). They studied 29 CRT eligible candidates (97% had LBBB). Patients were randomized to either HBP or biventricular pacing (BiVP). Patients were crossed over to the other pacing modality after 6 months. The HBP implant success rate was 96.6%.

Electrical resynchronization with QRS narrowing was achieved in 72% of patients at implant.

Quality of life, NYHA class, 6MWT and LVEF were significantly improved in both pacing modes compared with baseline. The other single-blinded RCT, the His-Sync study, was conducted by Upadhyay et al (29). They studied 41 CRT eligible candidates. Patients were randomized to His-CRT and biventricular pacing CRT (BiV-CRT).  Cross over occurred in 48% of His-CRT arm and 26% in the BiV-CRT arm. At median follow-up of 6.2 months, His-CRT resulted in significant QRS narrowing (172±16 ms to 144±30 ms, p=0.002), while BiV-CRT did not. Both His-CRT and BiV-CRT resulted in similar improvement in LVEF (median +9.1% (5-14.4%) vs +5.2% (1.5-11.3%), p=0.33). The His-CRT group had higher pacing threshold than BiV-CRT group (median 1.7V versus 0.9V, p=0.046). Overall, cardiac event rates were low (6 cardiovascular hospitalizations and 2 deaths). There was no lead dislodgement reported. The study was underpowered to detect clinical outcome difference. Other studies (19-22, 27) recruited CRT eligible patients with heterogeneous backgrounds including heart failure with BBB, PICM and AF post AVN ablation, with narrow or wide QRS complexes. The longest follow-up periods were up to approximately 3 years (19, 21, 23).

Most studies have demonstrated that HBP results in electrical resynchronization (QRS narrowing or normalization of BBB), improvement of NYHA class, LVEF, and left ventricular reverse remodelling in CRT eligible candidates. However, these studies had small sample-sizes and were underpowered to detect statistically significant difference in clinical outcome in terms of mortality and heart failure hospitalization.

The largest multicenter observational cohort was conducted by Zanon et al. (36). Eight hundred and forty-four patients (AVB in 41.2%, sinus node dysfunction in 17.4%, AF with bradycardia in 39.7% and CRT in 1.7%) received HBP. The mean HBP pacing threshold was 1.6V at implant and 2V at follow-up.  In the first 368 patients, HBP was achieved using deflectable curve delivery sheaths. In the subsequent 476 patients, HBP was achieved using fixed-curve delivery system (p<0.001). The fixed-curve delivery system was associated with lower pacing threshold (1.7±1.1 V vs 2.4±1.0 V, p<0.001) and lower complication rate (4.2% vs 11.9%, p<0.001). The paced QRS was 123±29 ms vs 112±28 ms at baseline. The 64 (7.6%) patients had interruption of HBP pacing at 3 years follow-up due to elevated capture thresholds, sensing issues, infection, lead dislodgement, lead fracture and upgrade to biventricular devices.

Keene et al. (35) conducted a multicenter observational cohort study involving 529 patients with persistent or intermittent high grade AVB. His bundle pacing was successful in 87% of patients. Pacing threshold was 1.4±0.9V at 0.8±0.3ms at implant and 1.3±1.2V at 0.9±0.2ms at follow-up. His bundle pacing preserved electrical synchrony (Intrinsic QRS 116 ± 31 ms vs HBP paced QRS 115 ± 24 ms (p=0.5)). Lead re-intervention or deactivation rate was 7.5% at 7.2±10 months follow-up (mostly related to lead dislodgement or rise in capture threshold). Five patients died within the follow-up period (3 died of progressive heart failure, 2 died of unknown cause).  Zanon et al. (33) conducted a prospective cohort of 307 patients with pacemaker indications. Selective HBP and para-Hisian HBP were performed in 87 and 220 patients respectively. The capture thresholds for selective HBP and para-Hisian HBP were 2.5±2.3V and 1.3±1.1V at implant, and 3.2±2.9V and 1.6±1.5V at 24 months (at 0.5ms) respectively.  His bundle pacing resulted in narrow paced QRS (108±21ms vs intrinsic QRS 104±31ms). Lead complication rate was 3.9% at 20±10 months follow-up.  Beer et al. (30) performed HBP in 294 patients with pacing indications. Pacing threshold was 1.6±1V at implant. Six percent of patients required lead revision at follow-up. His bundle capture threshold remained stable in 85% of patients. Vijayaraman et al. (31) studied 100 patients with advanced AVB and preserved LVEF. His bundle pacing normalized His-Purkinje conduction in 76% of patients with infra-nodal block. However, these 5 large HBP observational cohorts did not include control groups to assess the comparative benefit of HBP over conventional RVP, in terms of HF hospitalization, LVEF improvement, left ventricular reverse remodelling and mortality.

Abdelrahman et al. (34) performed HBP in 332 consecutive pacemaker recipients. Pacemakers were indicated for sinus node dysfunction and AVB in 35% and 65% of patients respectively. The implant success rate was 92%. The clinical outcome was compared with 443 RVP patients.

Sharma et al. (44) studied 94 pacemaker recipients without HF, HBP significantly reduced HF hospitalization (2% vs 15% in RVP patients, p=0.02) in those requiring >40% ventricular pacing (in >60% of patients), during a mean follow-up period of 25.5±8.6 months. There was no difference in mortality between HBP and RVP patients.

Systematic review and meta-analysis of His Bundle Pacing Studies

Six meta-analysis were reviewed. Zanon et al (45) performed the first systematic review and meta-analysis of 1438 patients who received permanent HBP over a period of nearly 20 years, in 16 centers around the world.  The average implant success rate was 84.8%. The LVEF of HBP patients improved from 42.8% at baseline to 49.5% at 16.9 months’ follow-up.

Among the 907 patients in the 17 studies, which reported safety information, implant complication rate was 4.7%.

There were 26 lead revisions due to lead dislodgement (n = 6) and elevated threshold (n=20).  Early device replacement due to battery depletion was uncommon (0.66%).

Slotwiner et al. (47)  performed a systematic review on physiologic pacing versus RVP among patients with LVEF > 35%. The review included 679 patients in 8 HBP studies.

Pooled analysis of BiVP and HBP recipients showed that physiologic pacing improved left ventricular reverse remodelling as shown in Figure 2 (left ventricular end-systolic volume and left ventricular end-diastolic volume reduced by -7.09 ml, p=0.0009; I2=12.98%; and –2.77 mL; p=0.001; I2= 0% respectively) and LVEF (LVEF improved by 5.328%; 95% CI: 2.86–7.8; p<0.0001; I2=39.11%) compared with RVP at mean follow-up of 1.64 years.   His bundle pacing did not demonstrate consistent benefit over RVP in terms of functional status, quality of life and survival.   Patients with LVEF between 36% and 52% were more likely to derive cardiovascular benefit from physiologic pacing. Patients with chronic AF who underwent AVN ablation derived improvement of LVEF from physiologic pacing versus RVP. 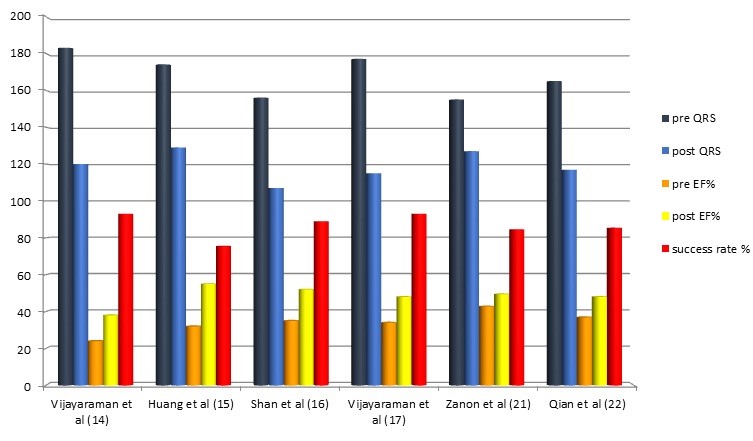 Figure 2.  QRS duration, ejection fraction before and after His-bundle pacing  along with success rate in reported in various studies

Latest guideline has given HBP a class IIa recommendation in patients with reduced LV ejection fraction (LVEF) between 36% and 50% who require chronic ventricular pacing (51).

There are certain limitations for HBP. Firstly, the implant success varies considerably in early studies, ranging from 56% to 95%. The success rate in later studies (1, 19, 20, 31, 41) improved with accumulation of operator experience. Secondly, HBP patients have higher pacing threshold compared with conventional RVP. Some patients encountered chronic threshold elevation at follow-up.

Thirdly, the concern of lead instability/ dislodgement often requires an additional backup pacing lead in some patients. The early lead revision rate was higher in HBP patients (4.2% versus 0.5% in RVP) (34).  In a latest study of 295 HBP patients, Teigeler et al. (39) has shown that loss of HBP capture and lead revision occurred in 17% and 11% of patients respectively at long term follow-up (~23 months). Finally, the progression of infra-Hisian His / Purkinje system conduction disease distal to the sight of HBP might result in unpredictable ventricular non-capture at follow-up. The advent of left bundle branch pacing might potentially alleviate some of the above limitations of HBP.

The His-bundle pacing vs RVA pacing in patients with reduced ejection fraction (HIS-PrEF) study (ClinicalTrials.gov Identifier: NCT04529577) is a double-blinded, RCT with crossover design. It aims to compare the effect of HBP with RVA pacing in patients with slightly or moderately reduced ejection fraction and AVB with pacing indication. The primary outcome is LVEF at 6 months.

The His bundle pacing in bradycardia and HF study (ClinicalTrials.gov Identifier: NCT03008291) by the Mayo Clinic group is a prospective cohort study. It aims to study the effect of HBP on normalization of atrioventricular conduction in heart failure, CRT candidates with conduction disease.  The mapping and pacing of the His bundle for HF patients with LBBB  (MAP HIS HF) study (ClinicalTrials.gov Identifier: NCT03803995) is a prospective, single-arm, non-randomized study to assess the locations of HBP that results in correction of electrical dyssynchrony using electroanatomical mapping system.

What our paper adds?

Our paper has reviewed the latest and most large-scale observational studies of HBP, RCTs and meta-analysis on HBP over the 2 decades. It has systematically summarized the major HBP trials, study sample sizes, study design, patient characteristics, follow-up duration, pacing thresholds, QRS duration at implant and follow-up, long term clinical outcome and complication rates. It has also summarized conclusion from major meta-analysis regarding the benefit and limitations of HBP.

Knowledge gap and future research directions – what is still unknown

Most of the published HBP studies are observational cohort studies and small-scale randomized trials. The patient populations in these studies were heterogeneous. The long-term beneficial effect of HBP over RVP or CRT, in terms of heart failure hospitalization and mortality remains to be demonstrated by future large-scale randomized control trials. The long-term durability and stability of HBP leads and the effect of high pacing threshold on current drain and device longevity requires long-term follow-up evaluation.

It is a viable alternative for CRT eligible patients who have failed left ventricular lead implantation or who are CRT non-responders. The current evidence and clinical guideline support the use of HBP in patients with impaired LVEF (between 36-50%) and high pacing dependence. Future randomized studies are warranted to assess the long-term clinical benefit and safety of HBP in pacing dependent and heart failure population.

Authorship:  J.K.C., S.M., N.K. are equally contributed to study and preparation of article 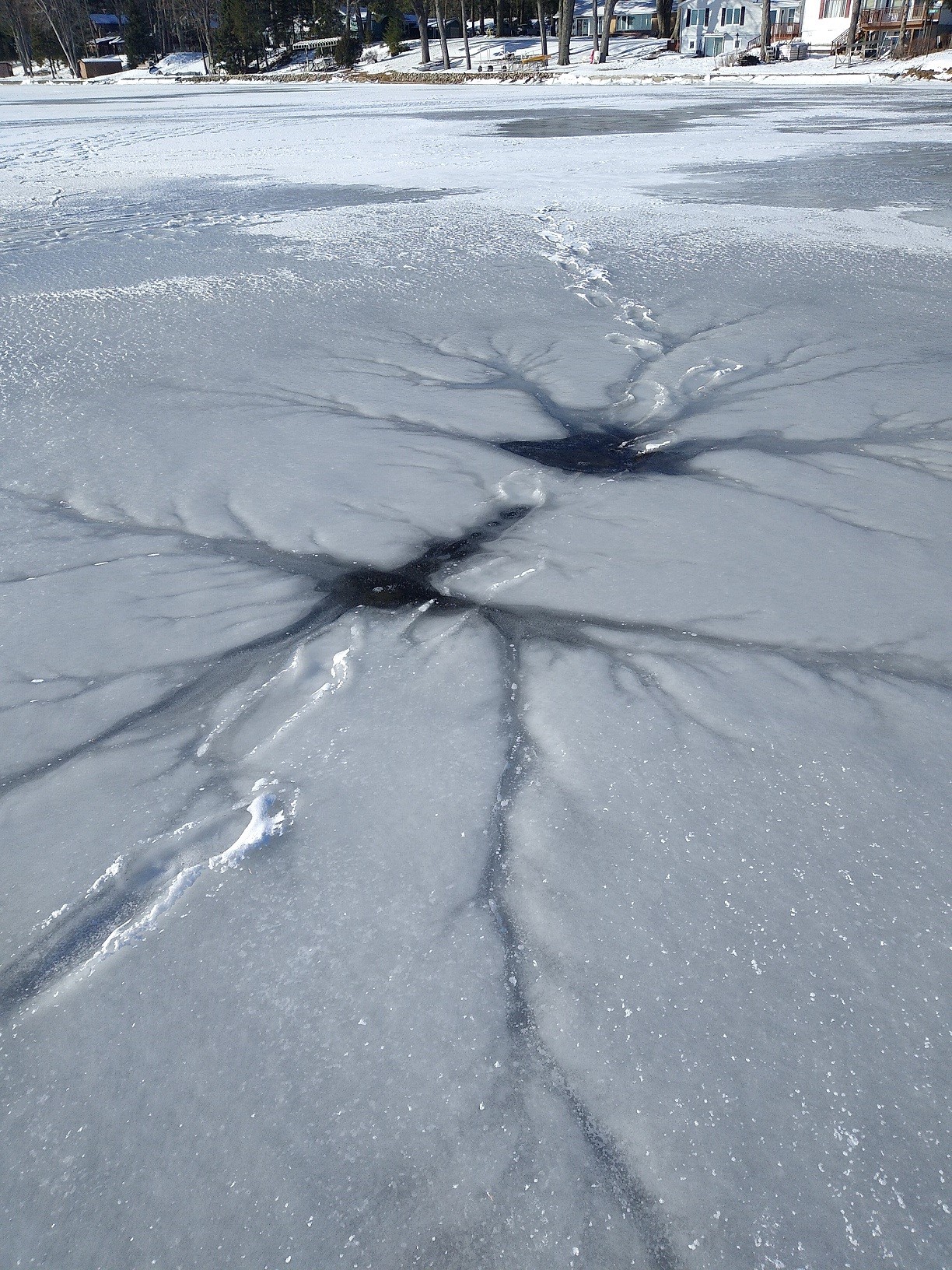 Lake Higgins in Northern Michigan, USA. National Geographic rated it as the sixth most beautiful lake in the world.

It is a glacier formed lake, and is spring fed, and is incredibly clear with an underwater visibility of 42 feet. It has an average depth of 35 feet and is 135 feet deep at most. It freezes sufficiently in winter that one can walk and snowmobile and ice fish on it.  Dan Hermes, Michigan, USA.