We report a case of a 55-year-old gentleman who had undergone thoracic EVAR. Thirty months after the given procedure he presented with RTAD and underwent supracoronary aortic replacement.

The article is intended to remind the clinicians of the importance of early detection of the possible complications when performing EVAR, and the significance of a rapid response.

Acute aortic dissection is the most life-threatening condition which occurs in 30% of all pathological processes affecting the thoracic aorta (1). Without undergoing surgery 33% of patients in this category die within the first 24 hours, and another half of patients pass away within 48 hours (2).

Aortic dissection requires immediate medical attention. Traditional cardiac surgery, or open-heart surgery, is now partially replaced by endovascular techniques. As of today, the possible options include open surgery, endovascular aortic repair (EVAR), and hybrid procedure (combinations of the previous two). Each technique has its indications, advantages, disadvantages, and potential complications. Therefore, the optimal approach to the aortic dissection treatment is still a matter of debate (3).

The indication for surgery is the dissection that involves the ascending aorta and the aortic arch (Type A Stanford, Types I and II DeBakey). Hybrid or endovascular procedures seem to be an attractive alternative treatment for patients with a complex aortic disease and high risk of the conventional arch or thoracoabdominal surgery. Indications for the endovascular stent-grafting on a Type B dissection are “TEAR'EM”, where T stands for TEVAR expertise, E – effusion-left pleural, A – aneurysmal dilatation, R – refractory pain, E – extension proximally, and M – malperfusion syndrome.

During thoracic endovascular aortic repair (TEVAR) the endoprosthesis (a stent-graft) has to be adequately sealed at the point of the primary tear (4). It must prevent the postimplantation aortic dissection. Unfortunately, the retrograde Type A aortic dissection (RTAD) might still occur after TEVAR. Despite the fact that it is infrequent, the mortality rate remains high (5).

Retrograde progression of the dissection to the arch and to the ascending aorta requires an urgent surgical operation. Stanford Type A, De Bakey Type I or II remain the most lethal; they are the indications for a prompt surgical intervention (6).

We present the case of a 55-year-old gentleman with the acute aortic syndrome, who was diagnosed with the retrograde Type A aortic dissection 30 months after he had undergone TEVAR.

A 55-year-old gentleman presented with the acute aortic syndrome and a history of the distal aortic arch and the descending thoracic aortic dissection. The patient had been treated at another hospital (abroad), where he underwent TEVAR. Thoracic descending stent-graft by Cook device (30х380 mm) was implanted. Endoprosthesis was placed in zone 1, extending along the aortic arch and the descending thoracic aorta to the Th9 level. During TEVAR an orifice of the left subclavian artery was closed without acute ischemia of the left upper extremity. No complications were observed in the postoperative period.

Patient was scanned with a 64-CT scanner (GE Light Speed VCT, GE Healthcare). Angiographic scan parameters included the following: number of slices per rotation – 64; individual detector slice width of 0.625 mm; and 24.21 mm spatial coverage in 1 seconds at a gantry rotation speed of 0.8 seconds. After the patient was advanced into the scanner bore, the first scanning consisted of a localizer image of the thoracic and abdominal cavity and pelvis. The second scan phase was a non-contrast scan performed with the scanning parameters including gantry rotation time 0.8 seconds, tube voltage 140 kVp, tube current 250 mA, and collimation 64 × 0.625 mm. The third scan phase was the contrast-enhanced angiogram. The patient was asked to breathe deeply and then hold his breath at end-inspiration. Ultravist 370 (Bayer Healthcare, Germany)  was administered according to the following protocol: 110 cc at a rate of 5 cc/second. The imaging parameters for this scan were: rotation time 0.8 seconds, tube voltage 140 kVp, tube current 250 mA, and collimation 64 × 0.625 mm. After image acquisition, images were transferred to a GE® AW workstation for analysis.

In the analysis of a series of obtained tomograms of the aorta in unenhanced and arterial phases, axial, coronal and sagittal sections, we used multiplanar and volumetric reformations.

The thoracic aortic dissection from the level of the right coronary artery was visualized with spread to the brachiocephalic artery (Fig. 1, Fig. 2), as well as thrombosis of the proximal segment of the left subclavian artery and functioning of the false lumen at the level of endoprosthesis and distally to the abdominal aortic bifurcation with the partial thrombosis of the false lumen (Fig.3). 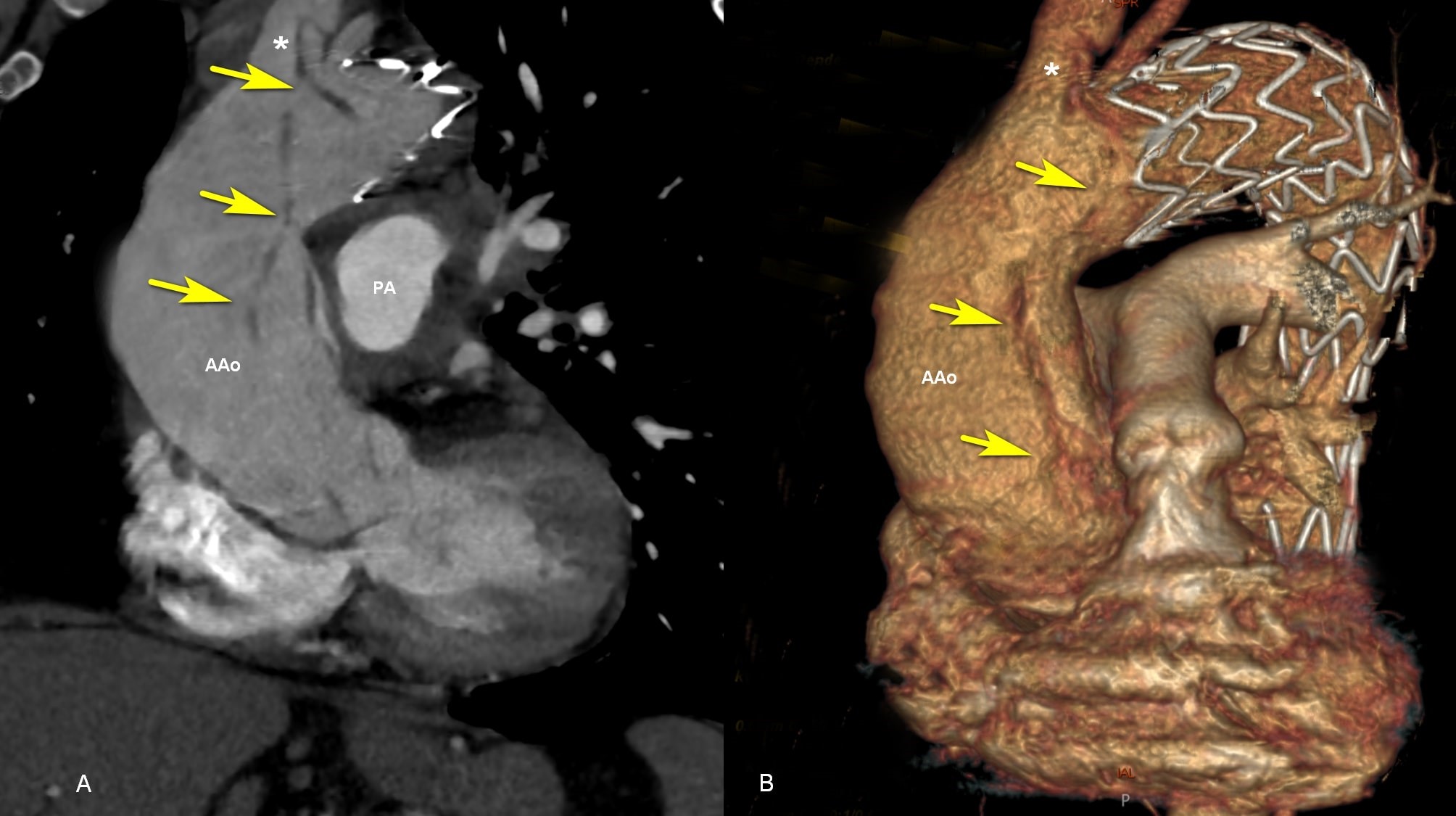 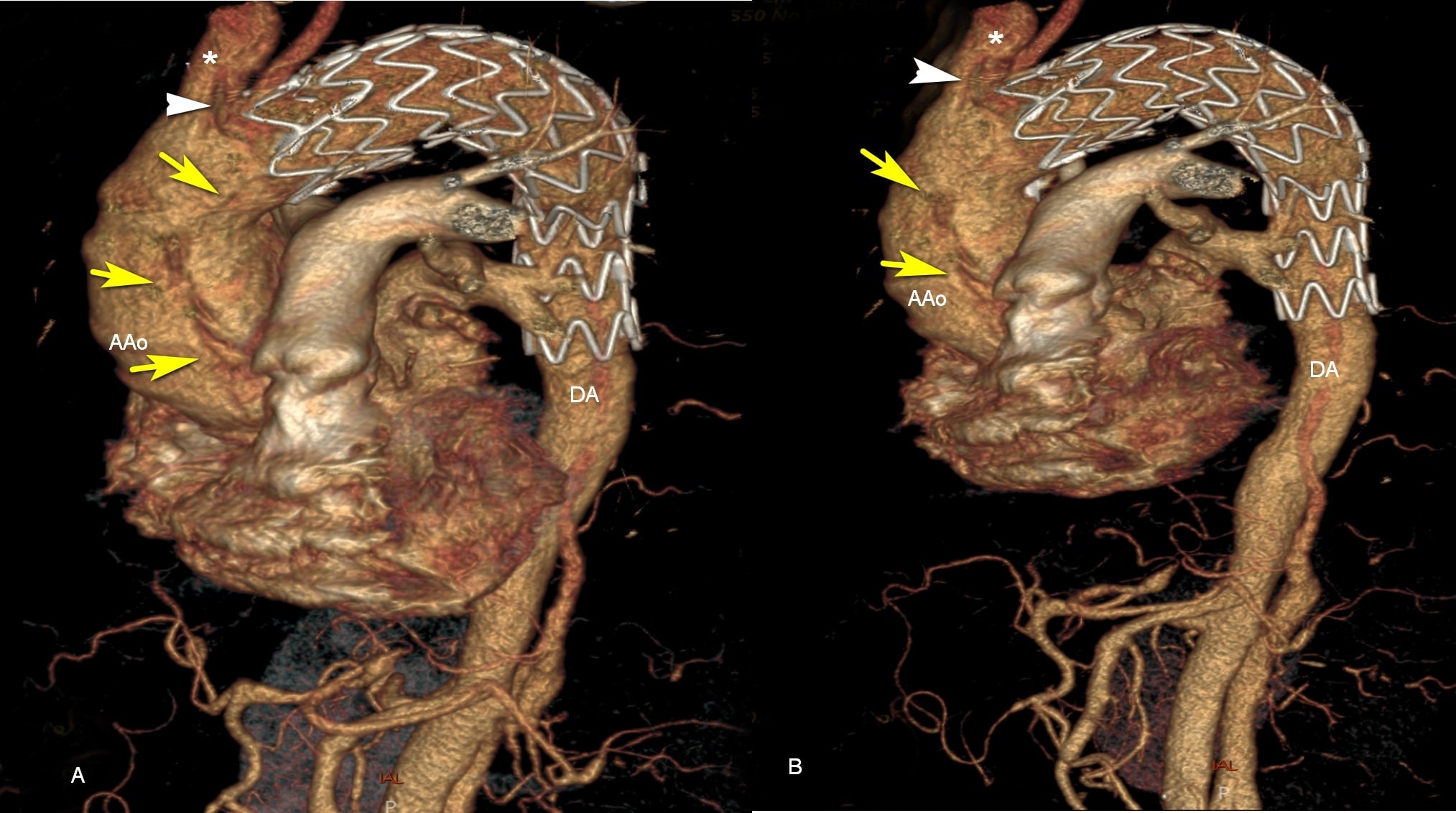 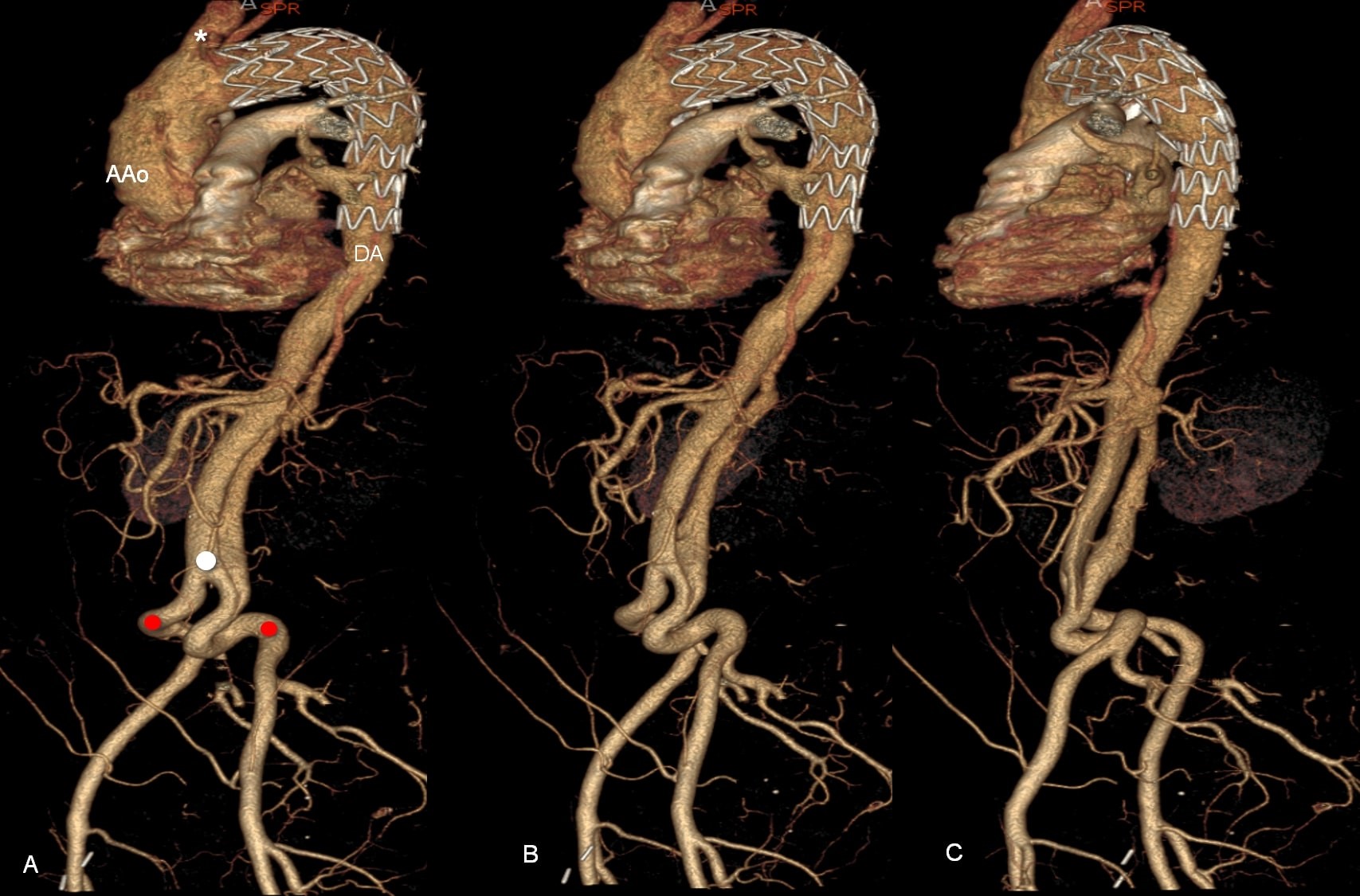 Coronary arteries were patented with good filling and appeared to be intact (Fig. 4). The aortic dissection extended to the abdominal aortic bifurcation with the transition to the proximal segment of the left common iliac artery (Fig. 5).

Fluid in the pericardial cavity was present in small quantities: up to 9-10 mm with inhomogeneous density ≈ + 20- + 40 HU. 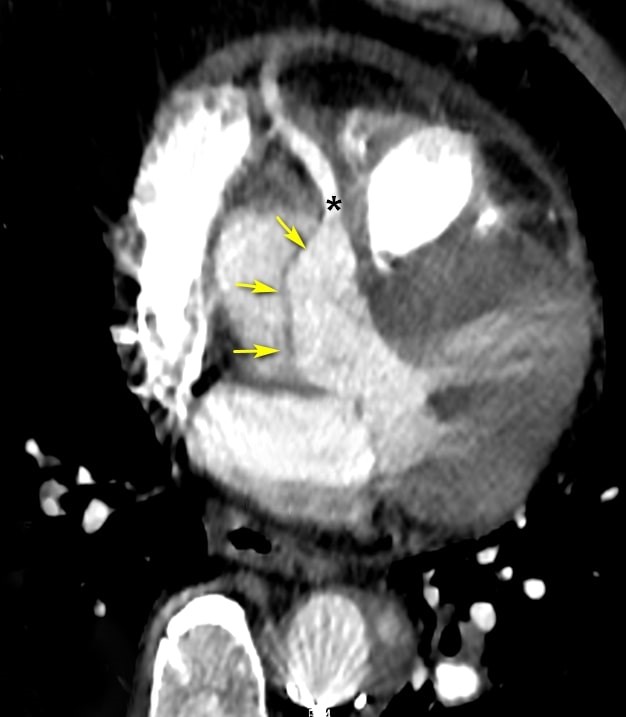 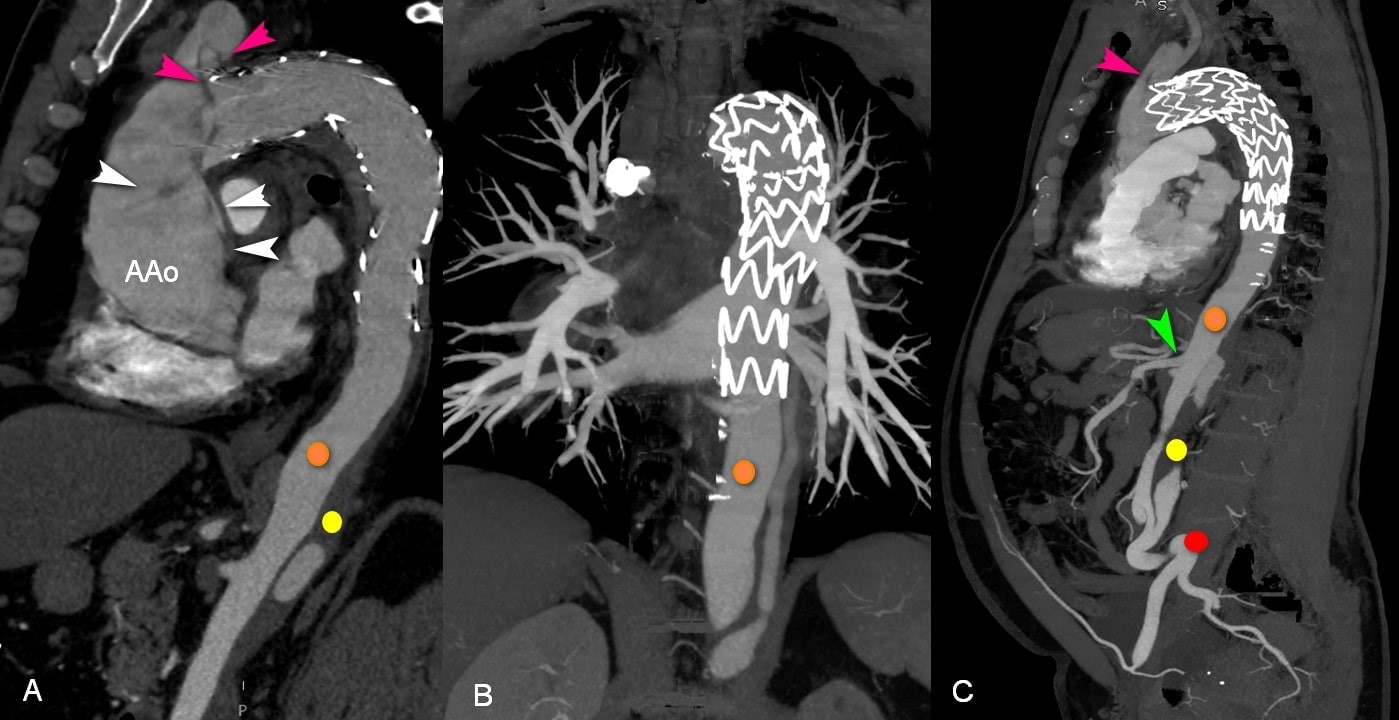 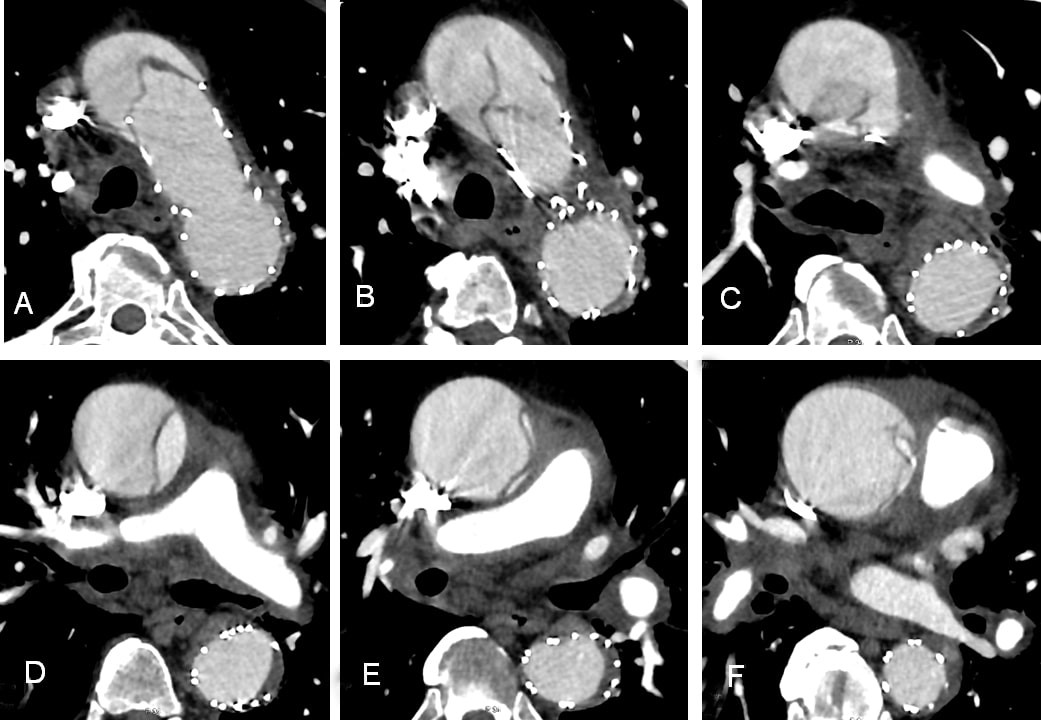 An end-to-side anastomosis was sewn between the left common carotid artery and the vascular graft prosthesis Vascutec 8 mm (Prolene 5-0). Cardiopulmonary bypass (CPB) was instituted by the left common carotid artery and the right atrial cannulation; cooling down the patient. After placing the aortic cross-clamp (ACC), the ascending aorta was opened. First antegrade blood cardioplegia was into coronary arteries ostia, retrograde blood cardioplegia later. The aortic valve was tricuspid without valve pathology. 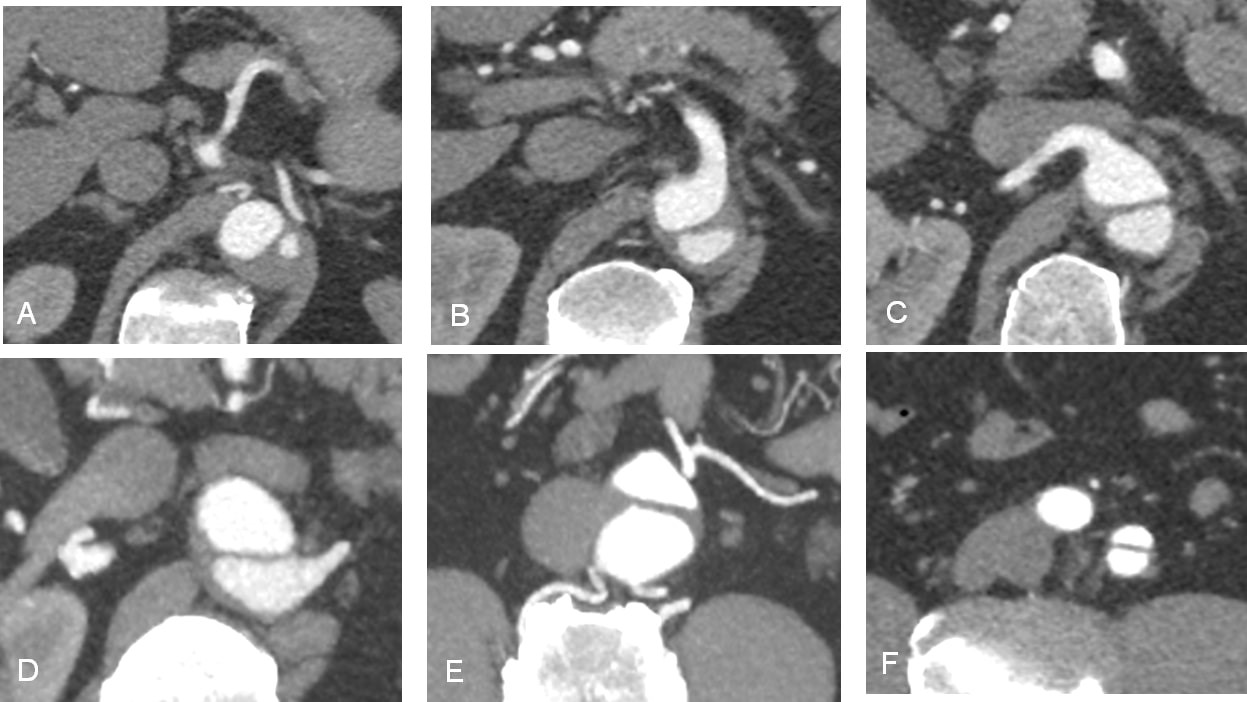 The aortic valve resuspension was performed. The ascending aorta was cut 1.0 cm above the coronary ostia and the aortic valve commissures. A proximal anastomosis was placed between the ascending aorta and the vascular graft prosthesis Intergard 28 mm (Maquet, Rastatt, Germany), using the telescopic suture (Prolen 5-0). The suture line was additionally reinforced with U-shaped polypropylene sutures (Prolen 4-0) with Teflon pledgets around the perimeter. In parallel, the patient was cooled down to 18C° and the CPB changed to selective antegrade cerebral perfusion (unilateral ACP) through the left common carotid artery. The distal ascending aorta was cut just below the brachiocephalic artery. Endograft, placed 30 month ago, was visualized. It was established well, no signs of endoleak were detected, the ostium of the left subclavian artery was not visualized. Additionally, the brachiocephalic artery ostia was cannulated and switched to bilateral ACP mode. "Open" distal anastomosis was performed between the distal ascending aorta and the vascular prosthesis with a continuous double-row suture (Prolene 4-0); on the inside – additional U-shaped sutures with pledgets. Rewarming. Restoring the cardiac activity. Standard finishing procedures.

The patient successfully underwent SCAR and was discharged from the hospital without any major complications.

There are several classifications of the aortic dissection, namely the Stanford, DeBakey, Svensson, and Penn classifications (7). The basis for the new classifications was laid by a significant difference in the effectiveness of surgical treatment of the ascending and descending aortas. In the description of this case we used Stanford (Type A, Type B) and DeBakey (Type I, Type II, Type IIIA, and IIIB) classifications.

Based on these classifications, a tactical division is established: Type A is an absolute surgical emergency, Type B is mainly subject to conservative therapy in the form of controlled hypotension. Exceptions to the use of surgical treatment for Type B are, in particular, cases of rupture of the descending thoracic aorta with the development of haemothorax (10).

Innovative methods in cardiology and cardiac surgery are changing the approach to the treatment of aneurysms and aortic dissections (11). While Type A dissections are still subject to open surgery only, Type B dissections are possible to be treated with the help of endovascular (stent-graft) or hybrid procedures.

The first operation of the aortic endoprosthesis (endovascular aneurysm repair, EVAR) in the world was performed by Ukrainian professor Mykola Volodos (15.05.1934 – 3.04.2016) in 1987 (12). Wider use of EVAR makes it possible to adequately place prosthesis into the segment of the aorta which was affected by the aneurysm or dissection, as well as avoid complex traumatic open operations that require thoraco-phreno-lumbotomy.

Indications for the endovascular stent-grafting on Type B dissections are “TEAR'EM”, where T stands for TEVAR expertise, E – effusion-left pleural, A – aneurysmal dilatation, R – refractory pain, E – extension proximally, and M – malperfusion syndrome. After opening, mesh endoprosthesis strengthens the aortic wall and prevents its rupture (13). Endovascular treatment of acute Type B aortic dissections is designed to prevent the retrograde dissection of the ascending aorta and the aortic arch (5). Unfortunately, postimplantation Type A aortic dissection is one of the possible complications. Although delayed rupture is uncommon, the mortality rate is high (4).

CT angiography (CTA) allows you to choose the optimal technique to plan a surgery. It is important for the surgeons to receive information from the radiologist about the initial intimal tear, sizes of the true and false lumens, presence of thrombus in the false lumen, length of the dissection, presence of compression of the true lumen, compression of the orifice of the aortic branches, and dynamic or organic malperfusion syndrome (17). In complicated cases, for instance, after stent-graft implantation, re-entry in the thoracic and abdominal parts of the aorta, lending zones should be assessed.

In the case described, CTA showed the condition after endoprosthesis of the aortic arch and the descending thoracic aorta. Stent-graft was performed after the Stanford type B aortic dissection. CT scan was typical of the retrograde dissection of the ascending thoracic aorta to the level of the right coronary artery with the brachiocephalic artery dissection (Stanford Type A, DeBakey Type I), with the functioning of two lumens and partial thrombosis of the false lumen from the level of the endoprosthesis to the aortic bifurcation and the spread of dissection to the proximal segment of the left common iliac artery; signs of aneurysm of the ascending thoracic aorta, hydropericardium with haemorrhagic component; kinking of both common iliac arteries.

The patient initially had no indications for the hybrid treatment. Type B aortic dissection 30 months before the given event had involved the isolated implementation of the endovascular restoration of perfusion of the aortic branches by stenting. Acute onset of Type A aortic dissection caused the second stage – the classic correction of the ascending aorta and the aortic arch.

Etiology of the retrograde aortic dissection remains unknown (20). The reasons may include unfavorable anatomy, mismatch of the size of the stent-graft, technical difficulties in the implantation of endoprosthesis, etc. Imaging follow-up is important (21). Neurological deficit in the patient, uncontrolled hypertension, progressive atherosclerosis require adequate assessment of the anatomy of the stent-graft.

Aortic dissection is a disease with a high mortality rate; it remains one of the most difficult pathologies to treat. With the advent of TEVAR, the concept of hybrid treatment of the acute aortic dissection has emerged. The latter involves the primary endovascular restoration of perfusion of the aortic branches by fenestration or stenting, followed by the second stage of the delayed classical correction on the ascending and / or the aortic arch. Type B aortic dissection treated with TEVAR may lead to complication (RTAD); it requires an urgent open surgical approach with the use of cardiopulmonary bypass. CTA allows you to choose the optimal technique to plan both hybrid procedure and proper preoperative assessment.

The case-report provides the description of the RTAD, which required urgent SCAR after TEVAR 30 months ago. Medical staff should pay attention to the patient’s anamnesis to make a right clinical decision. Often an acute chest pain is associated with heart attack with very different diagnostic and clinical approach. It is an important fact that pathology could be verified owing to timely and modern aortic imaging diagnostic. It allows not only predicting surgical treatment, but also it is the method of detailed quality control of the completed procedure.

Ethics: Informed consent was obtained from a patient

Conflict of interest: Nothing to declare

Authorship: U.P., M.M., A.V., D.B. are equally contributed to management of case and preparation of article

Acknowledgement and funding: The study was conducted and funded within the scientific research program of the Department of Normal Anatomy at Danylo Halytsky Lviv National Medical University (Lviv, Ukraine) according to the research topic «Morphofunctional features of organs in pre- and post-natal ontogenetic periods under the influence of opioids, food additives, reconstructive surgeries and obesity» 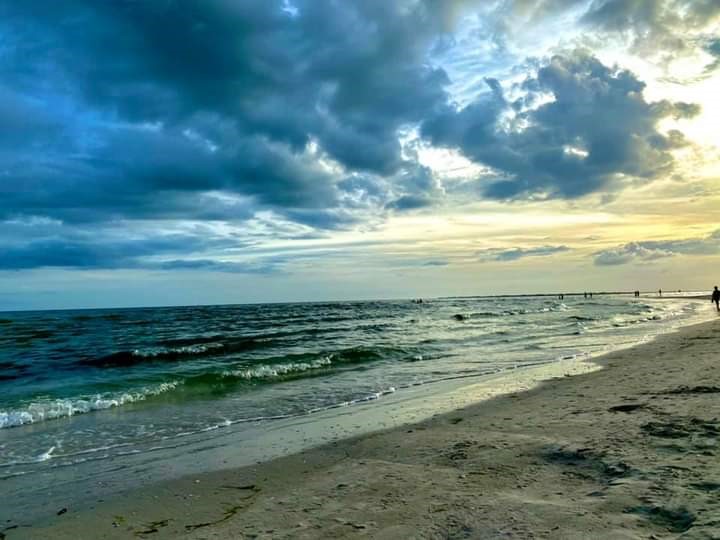