Answer to Quiz – Imaging and Discussion

Answer to Quiz – Imaging and Discussion

Magnetic resonance imaging as a tool to examine the brain pathology

Time-of-flight (TOF) angiography is an MRI technique to visualize flow within vessels, without the need to administer contrast. It is based on the phenomenon of flow-related enhancement of spins entering into an imaging slice. As a result of being unsaturated, these spins give more signal than surrounding stationary spins. The principle of TOF angiography is based on the fact that the in-flowed and highly magnetized blood appears bright against the background of saturated (in terms of MR) surrounding soft tissues. The surrounding tissues within the given volume of interest are hypointense by saturating the radiofrequency pulses and superimposing the gradient.

Phase-contrast angiography. The principle of phase-contrast angiography is based on the presence of a phase shift between the protons of stationary surrounding tissues and moving with blood spins. The phase shift is caused by the effect of a bipolar gradient with two components with different signs - positive and negative. Such physical features of the mode make it possible to obtain a bright display of the vascular structures against the absence of a visualization of surrounding tissues. The main advantages of time-flight non-consecutive research are that with high spatial resolution and high signal/noise ratios we obtain good diagnostic quality of arterial channel images as extra- as well as on the intramural level. The study takes relatively little time. At the same time, the low sensitivity of the technique to detect slow blood flow should be noted. That is there are practical difficulties in assessing the condition of the venous channel.

The arrow indicates the superior cerebellar artery, departs from the basilar artery, and provides blood to the upper part of the cerebellum and part of the midbrain, passing laterally under the posterior cerebral artery (separated from it by the oculomotor nerve). 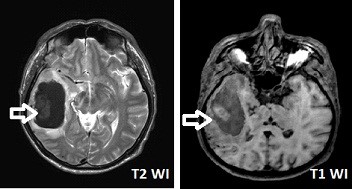 MR tractography. Diffusion-tensor imaging (DTI) is a non-invasive, non-contact imaging technique that visualizes the orientation and integrity of the conductive pathways of the brain in vivo. The physical basis of this method is based on estimating the diffusion of water molecules along the myelin envelope of nerve fibers and obtaining information about the connections between different parts of the brain and the integrity of the conductive pathways (nerve pathways, bundles of nerve fibers).

In the image, the corticospinal tract originates in several parts of the brain, including not only the motor regions, but also the primary somatosensory cortex and premotor regions. Most neurons originate in the primary motor cortex (the precentral gyrus, Brodmann zone or in the premotor frontal regions). 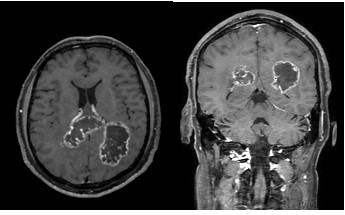 MRI makes it possible to assess the structure of an object to a high degree, but sometimes it is not enough. In such cases, MRI with contrast injection is recommended for differential diagnosis. Paramagnetic contrast drugs based on gadolinium are used for MRI. This investigation comprised mainly patients with intracranial tumors, multiple sclerosis, and nasopharyngeal tumors. Because of the contrast media, a radiologist can more accurately assess the tumor’s boundaries, structure, and composition. The degree of amplification of the MR signal during contrast media injection depends primarily on the blood supply intensity of the region being studied.

Callosum agenesis - a congenital defect in which a total or partial absence of the callosum body can be detected in isolation on an MRI, but is more commonly associated with multiple developmental defects.

3.The distance between the lateral ventricles is increased;

4.Colpocephalus - (expansion of triangles and occipital horns) gives a characteristic view of «moose head» on coronal images - image B;

5.Abnormal dilation of the posterior horns of the lateral ventricles;

For comparison with agenesis, drawings of other pathologies and norms are given (Fig. 6): 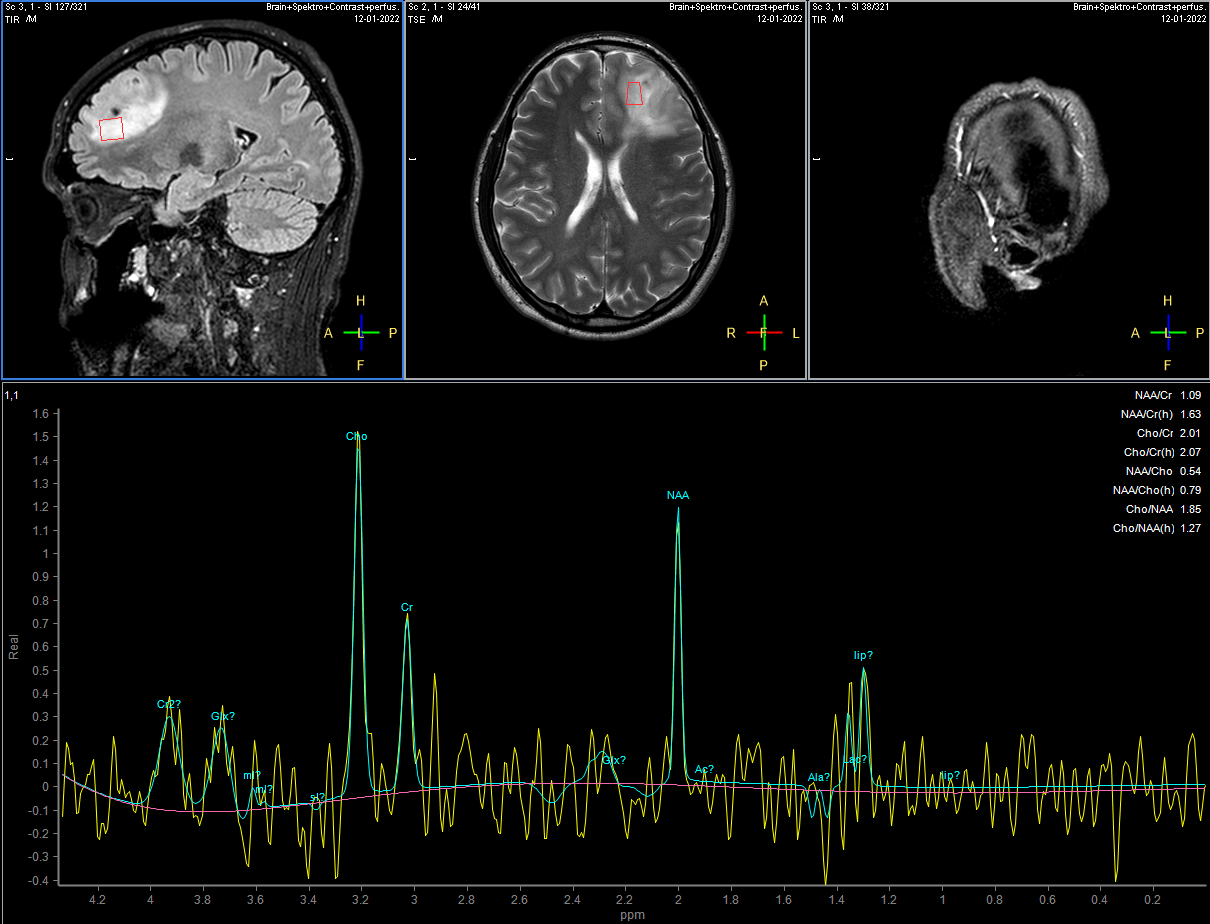 Magnetic resonance spectroscopy (MRS) is a method for detecting biochemical changes in tissues in different diseases based on the concentration of certain metabolites. The MRS reflects the relative abundance of biologically active substances in a particular tissue region, which characterizes metabolism. Metabolic disorders usually occur prior to clinical manifestations of the disease, so MRS can be used to diagnose diseases at earlier stages of development.

The main nuclei for in vivo-MRS are hydrogen (1H), 31-phosphorus (31P) and 13-carbon (13C). Of all the magnetic nuclei, the hydrogen protons give the largest signal of MR. Hydrogen atoms are part of all biological structures. Therefore, hydrogen protons are an excellent metabolic marker. However, proton spectroscopy is technically difficult. Water and lipid signals are not medically interesting, and the concentration of metabolites of interest to us is much lower. So the little metabolite signals are hidden by giant water and lipid signals compared to them. Only technically sophisticated methods such as selective excitation, selective saturation, relaxation and suppression spectroscopy allow to suppress these signals up to the level of metabolite signals and detect signals of metabolites such as lactate (Lac), choline (Ch) creatine (Cr), N-acetyl aspartate (NAA), phospholin (PCNO), d- myo-inositol, etc. 1H in vivo spectroscopy is used primarily for studying neoplastic, inflammatory and demyelinating processes, as well as their differentiation.