Methods: The efficacy of IABP was evaluated in patients presenting with CS in open-label, prospective, randomized (for randomization every alternate patient presented to an emergency was given IABP support), consecutive 60 patients in ACS with CS with group A (N=30) comprising of those with IABP and Group B without IABP (n=30).

Results: Both the groups were matched for baseline characteristics. The revascularization rate was 85% and only the culprit vessel was addressed during the study. Total 9 (15%) patients were managed medically and did not undergo revascularization. The mean changes in Systemic vascular resistance (SVR), cardiac output (CO) and cardiac power output (CPO) after 24 hours in patients with and without IABP showed no statistical difference except for the lower mean dose use of dobutamine in Group A (with IABP) vs Group B (without IABP) (4.08 (1.41) vs. 7.92 (2.52) mcg/kg/min, p<0.0001).

Conclusion: The use of IABP in Asian Indians with CS in ACS did not provide any improvement in hemodynamic parameters.

Acute myocardial infarction (AMI) is complicated by cardiogenic shock (CS) in 7-10% of cases and mortality in these patients can be as high as 80% (1).  Intra-aortic balloon pumping (IABP) has been the most widely used mechanical support device. In 2013, The American College of Cardiology Foundation/American Heart Association (ACCF/AHA) had released an updated guideline for patients with ACS, where the recommendation for the placement of IABP in CS was downgraded from Class I to Class IIa, because of the lack of clear superiority in clinical benefit and reduction of mortality (2, 3).

Based on IABP-SHOCK II trail, European Society of Cardiology (ESC) guidelines had downgraded the use of IABP to class III recommendation in ACS with CS patients (4).  However, the use of IABP may still be useful in selected group of patients presenting with CS especially in presence of mechanical complication of AMI. IABP inflates during diastole resulting in displacement of blood from thoracic aorta to coronary arteries and is followed by rapid deflection before onset of systole. This results in improved diastolic pressure and reduced systolic aortic pressure thereby reducing afterload which reduces left ventricular wall stress and  thus myocardial oxygen demand.

This was an open-label, prospective, observational randomized study; for randomization every alternate patient presented to emergency was given IABP support (CONSORT checklist –see appendix). Sixty consecutive patients presenting with ACS (STEMI & NSTEMI) with CS in whom a vasopressor agent was required for the treatment of shock were included in the study. The study excluded patients with mechanical complications of AMI.

Group A was comprised of patients receiving IABP on top of “standard medical care", received IABP pre-revascularization and within 2 hours of patients’ presentation.  Group B included patients with AMI  and CS without IABP.

ACS was defined as per the ACC/AHA 2017 definition. The inclusion criteria were presence of CS as per the definition used in IABP-SHOCK II trial (4):  if they had a systolic blood pressure of less than 90 mm Hg for more than 30 minutes or needed infusion of catecholamine to maintain a systolic pressure above 90 mm Hg, had clinical signs of pulmonary congestion, and had impaired end-organ perfusion. The diagnosis of impaired end-organ perfusion required at least one of the following: altered mental status; cold, clammy skin and extremities; oliguria with urine output of less than 30 ml per hour; or serum lactate level higher than 2mmol/liter.

Exclusion criteria of the patients were any of the following - If they were younger than 18 years or had already received a vasopressor agent (dopamine, norepinephrine, epinephrine, or phenylephrine) for more than 4 hours during the current episode of shock prior to enrollment or had any serious arrhythmia such as rapid atrial fibrillation (>160 beats per minute) or ventricular tachycardia and patients planned for ECMO/Impella or other mechanical circulatory devices apart from IABP. Cases of mechanical complications of AMI warranting need of IABP namely moderate to severe mitral regurgitation or ventricular septal rupture were also excluded.

The study was done at the largest tertiary care teaching center of Western India during November 2016 to January 2019. The study was approved by institutional ethics committee (UNMICRC/CARDIO/2016/16) and written inform consent was taken from patient’s relatives.

Cardiac output(CO) was then calculated based on the formula: 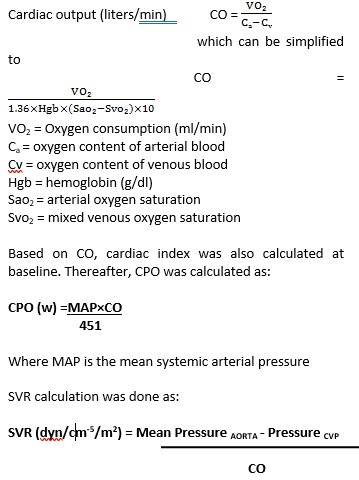 Our primary end-point was mean change in CO, SVR, & CPO at 6 and 24 hours from baseline. As per the clinical and hemodynamic assessment CO, CPO and SVR were measured at baseline, at 6 hours and 24 hours and as and when deemed necessary by the treating consultant. Inotropes and vasopressors were added for treatment of shock after calculating dosage per body weight as per the hemodynamic needs. The inotropes and vasopressors used were dopamine, noradrenaline, adrenaline, dobutamine and their combinations as warranted by standard medical care. Based on hemodynamics (CO, CPO and SVR) calculated at 6 hours, the dosage of inotropes/ vasopressors was modified if required and continued till 24 hours or beyond as warranted.

All statistical analyses were performed using SPSS v 22.0 (Chicago, IL, USA). Continuous variables were summarized as mean (standard deviation) and as median with interquartile range whereas categorical variables were expressed as percentage of the sample. Mann-Whitney-U test was used to compare two groups’ baseline and clinical continuous variables and Chi-square test to compare categorical variables.  Two-way ANOVA was used to find out the primary end-point of the study. Continuous variables were compared using the unpaired student’s t-test to find out the secondary end-point of the study. Group differences associated with a p value ≤0.05 were considered statistically significant.

The baseline and clinical characteristics between two groups are described in Table 1 and 2 and were evenly matched for demographics, number of vessels diseased, baseline left ventricular ejection fraction (LVEF) and type of AMI. The mean age of patients in two groups was 58.90 (11.95) years and 54.70 (14.28) years respectively. The hemodynamic parameters of both the groups were measured at baseline, 6 hours and at 24 hours. 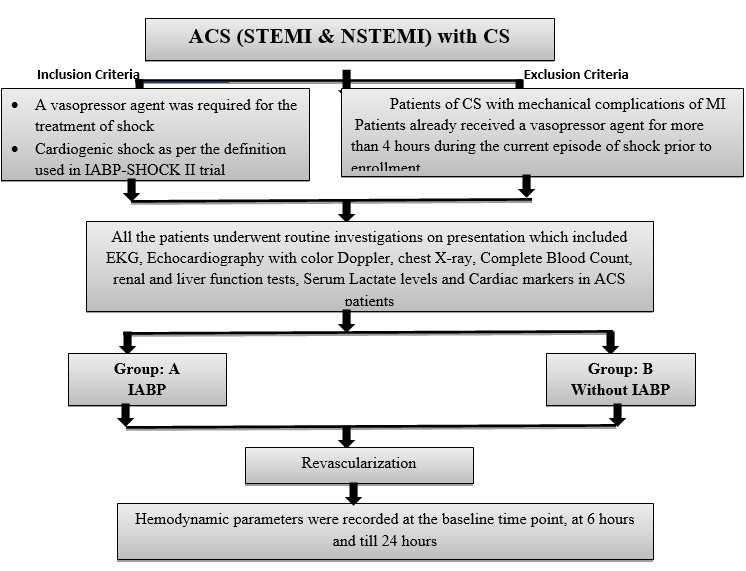 A two-way ANOVA revealed that there was not a statistically significant interaction between the effects of SVR, CO and CP (p= 0.49, 0.89 and 0.43) on IABP. Simple main effects analysis  showed that changes in SVR, CO and CP (p= 0.009, <0.0001 and <0.0001) have a statistically significant effects on baseline, 6 hours and 24 hours, meaning improvement of these parameter from baseline to 24th hour in both groups.

Complications noted in group A indicate access site bleeding in 2 (6.67%) patients. One of them required blood transfusion. No major limb ischemia was noted.

We tried to analyze impact of IABP on hemodynamic parameters in patients with ACS presenting in CS. Our study demonstrated no difference between groups in baseline characteristics . We revealed the hemodynamic parameters like cardiac output and cardiac power improved in both groups significantly with no difference between group with and without IABP, however use dobutamine was lower by 49% in group of IABP as compared without.  There was no benefit in mortality, second end-point as well.

IABP remains poorly studied in the setting of cardiogenic shock in ACS, especially amongst Asian Indians despite its wide usage in developing countries. IABP has been widely used in CS, high-risk percutaneous coronary intervention and cardiac surgery for hemodynamic support for decades (6, 7).

However, the widespread use of IABP in CS had been at odds with newer data emerging and also for the paucity of data supporting it especially amongst Asian Indians. Although commonly used in the setting of CS with ACS with mechanical complication, the utility of IABP in this setting has been called into questions by several randomized controlled studies (8-10), After publication of IABP-SHOCK II trial, IABP use has been downgraded in guidelines with a parallel decline in clinical practice (11-13).

IABP was recommended by ACCF/AHA guideline (2013), which stated that “The use of IABP  can be useful for patients with cardiogenic shock after ACS who do not quickly stabilize with pharmacological therapy (Class IIa recommendation, Level of evidence: A) (2). However, Sjauw et al. challenged the general recommendations for the use of IABP in patients with ST-segment elevation myocardial infarction complicated by CS and confirmed that IABP did not offer any advantage during PCI (13). These findings were further supported by a well-powered, prospective, randomized clinical trial (IABP-SHOCK II trail) (8, 10).

The use of IABP was not associated with any mortality benefit, which is similar to what we have found in our study. IABP was used in 50% of patients and it did not show any difference on in hospital mortality as compared to standard medical care alone (p= 0.8). Another review and meta-analysis done by Zheng et al. also supports our study (14). The in hospital mortality of patients with CS in our study was 55%, which is slightly more than that reported in various studies in past where it ranged between 42-48% (15). However, this was similar to what was seen in SHOCK registry (56%) and lower than what was seen in IABP-SHOCK II trial (63%)(4, 16).

Baseline serum lactate levels indicating the severity of end-organ hypoxia was one of the strongest predictors of long-term mortality showed by various clinical trials (17, 18). Amongst the patients with CS in whom IABP was used in our study, the mean level of lactate was not statistically different compared to those in whom IABP was not used (6.39 (4.72) and 5.56 (3.81), p=0.46).

Most studies on IABP were unanimous in showing a reduction in SVR, a slight increase in cardiac index (0.5L/min), and increased coronary flow (19). In a meta-analysis, of seven studies where a total of 790 patients with AMI and cardiogenic shock were, the authors concluded that the available evidence demonstrates some benefit in hemodynamic parameters, but does not result in survival benefit (19). As in our study we observed improvement in both groups in CO and CPO with no benefit in mortality and no effect of IABP.

The open-label design and small sample size could have confounded our results. The awareness of hemodynamic parameters at 6th hour would have also resulted in dosage alteration of inotropes thus confounding the results at 24th -hour. Being a single-center study not powered adequately, the result is not generalizable to other population and thus it warrants a larger multicenter study. We have included patients with ACS and cardiogenic shock. We plan to analyse sub group of STEMI patients in CS.

IABP use in CS with ACS did not significantly provide any change in hemodynamics as compared to standard medical care. The IABP use was associated with lesser requirement of inotropic support; the need of dobutamine was significantly lower to achieve similar hemodynamics.

Ethics: Informed consent was obtained from patients before procedures. The study has been approved by the institutional ethics committee (UNMICRC/CARDIO/2016/16)

Acknowledgement: None to declare

Funding: This work was supported by U. N. Mehta Institute of Cardiology and Research Centre itself and received no specific grant from any funding agency, commercial or not for profit 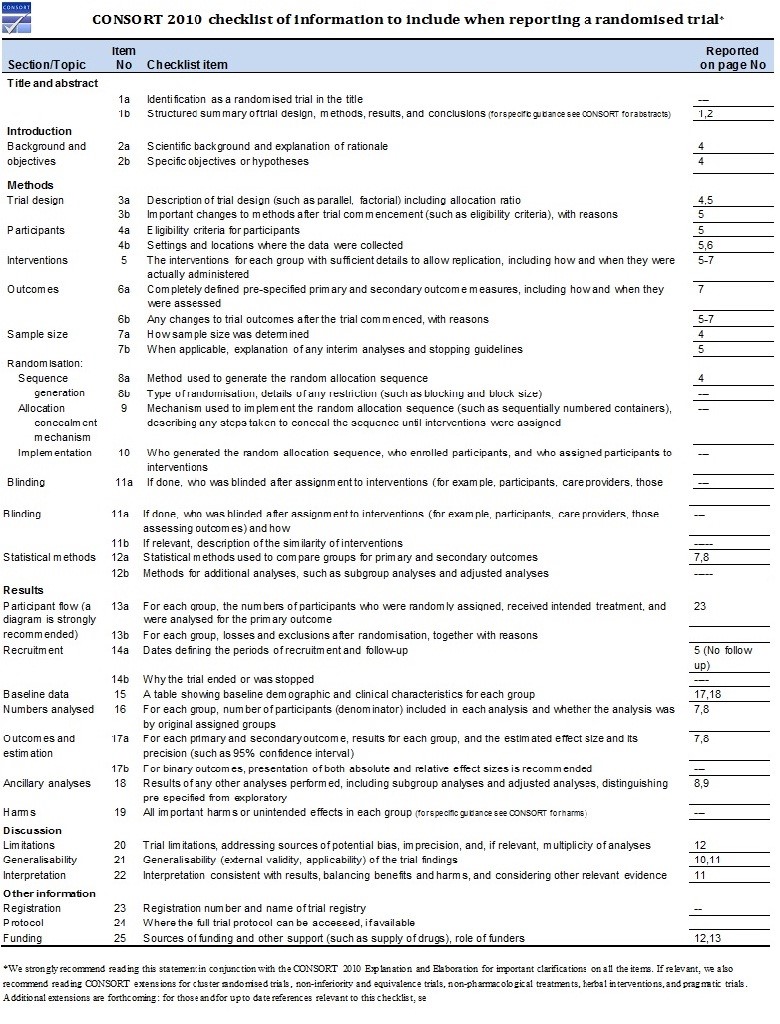