In this article, we narrated the epidemiological indicators of stroke in the world and in Kyrgyzstan as well. The data on morbidity, mortality and hospital mortality in acute cerebrovascular events, such as ischemic, hemorrhagic strokes, were shared.

Stroke is a global health burden as one of the leading causes of morbidity, mortality, and disability (1-3). Despite the stroke incidence, prevalence, mortality, and disability-adjusted life-years have declined over the past 20 years, the overall burden of stroke, in terms of the absolute number of people affected or remain disabled, have increased worldwide (2-4). Of all documented stroke deaths worldwide, 80–86% occurs in low- and middle-income countries (LMICs) with multifactorial etiologies (5).

There are substantial differences in the organization of stroke care between countries. One of the key figures in stroke management is the level of the healthcare institutions that provide medical care to stroke patients. The quality of care and survival of patients are mainly affected by the experience of personnel, as well as the scientific-technical backgrounds of stroke centers.

Several international and national guidelines have been developed and revised up to date to decrease the healthcare burden of cerebrovascular adverse events and increase the awareness of the whole population to combat the stroke and its complications.

Both crude mortality and stroke-associated in-hospital mortality (SAIHM) are important key indicators of the quality of inpatient care and reflect the issues of pre-hospital and in-hospital treatment, routing, and the degree of implementation of modern diagnostic and treatment algorithms in stroke management.

The SAIHM might be used to assess the efficacy of primary and secondary prevention, the quality of interaction between different levels of medical care. Furthermore, it is important to note that regional statistics may differ significantly from global ones, and the formation of specialized care programs for patients with stroke has its own national and organizational characteristics (2, 4).

Some authors categorized the "modifiable" and "non-modifiable" risk factors of SAIHM, which allow the objectification of immediate specific goals for improving positive outcomes in stroke management. Modifiable factors included the transport details (time and mode of routing), qualification of medical personnel, model of the stroke care system, and clinical parameters, which could be managed by primary care, i.e. history of stroke or transient ischemic attack, atrial fibrillation, diabetes mellitus, and other comorbidities. On the hand, non-modifiable factors consisted of sex and age predilections, type of stroke, and anatomical location of the lesion (6-9).

Voznyuk IA et al. reported the valuable information concerning the in-hospital mortality (6). As a result of the analysis of the available literature regarding the proportion of IHF in patients with stroke in the countries of the European Union, the Middle East, the USA, Canada, Ethiopia and China, it became obvious that direct indicators had significant differences.

Significant differences in the data can be explained both by the quality of medical care and by the peculiarities of collecting statistical data. At the same time, the level of hospital mortality fluctuated significantly in different institutions within the same country (5-8).

Furthermore, the analysis of this study demonstrated a faster rate of decline of SAIHM due to the introduction and expansion of the network of vascular centers for patients with stroke (with the obligatory department of “stroke units”)(10,11). In a number of countries, a decrease in SAIHM is associated with an increase in the cost of inpatient medical treatment, which induces the use of more thrombolytic therapy and transcatheter interventions. In St. Petersburg of the Russian Federation, according to its own monitoring and reports from Rosstat, there is a significant decline in SAIHM from 26% to 15.8% (6).

This current epidemiologic condition could be explained by several reasons. First of all, primary and secondary prevention measures have not yet reached their goal in the Kyrgyz Republic as in most low and middle income countries. Secondly, most of the cases of life-threatening forms of stroke (mainly hemorrhagic ones) remain challenging to the management. Nevertheless, the level of hospital care for stroke patients has improved, despite the difficulties in in-patient treatment, namely the lack of overall implementation of intravenous thrombolysis and endovascular thrombectomy in governmental hospitals.

So far, no studies have been conducted in Kyrgyzstan to identify the factors of SAIHM, the impact of neurological complications on early outcomes in stroke patients who received inpatient treatment. At the present stage, there are no definite, agreed and clear parameters for the indicator "in-hospital mortality" in stroke, there is no consensus on the assessment and calculation methodology.

The study that we are going to conduct to meet these goals will be a pilot study that will also predict the risks of death after ischemic and hemorrhagic stroke in a tertiary hospital setting.

Knowledge of the factors that determine the SAIHM will allow us to develop a targeted strategy for the development of services that provide a qualified stroke care, which should ultimately lead to its decrease. Currently, clinical guidelines for the in-hospital management of patients with ischemic stroke and transient ischemic attacks, approved by the Ministry of Health of the Kyrgyz Republic in 2017, are going to be revised and prepared for approval of guidelines for the management of patients with hemorrhagic stroke.

In-hospital mortality is the hallmark of the pre-hospital and hospital treatment of stroke and its complications. Significant differences in the rate of SAIHM can be explained both by the quality of medical care and by the statistical data collection.

According to Bishkek Brain Registry, over the past 10 years, there has been a positive trend in the SAIHM. However, morbidity and crude mortality from stroke remained the same. It is necessary to organize the collection of data from hospital registers to outline earlier and late outcomes of stroke and its sequelae, whose work in the Kyrgyz Republic has just begun. 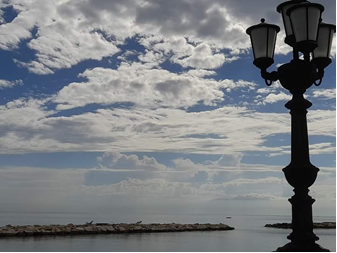 The sky over seaside of Bari. Paolo Amico, Bari, Italy