Our research has allowed us to outline the most rational ways of treating patients in modern conditions. In our research, we focus on “the golden mean'” - a combination of staged minimally invasive interventions and standard interventions. Aim of our study was to evaluate the results of postoperative complications using the developed algorithm of surgical tactics and choledochoduodenoanastomosis from a minimally invasive approach.

All patients were divided into two groups (main group and comparison group) depending on the method of treatment used.   The study group consisted of 17 (48.6%) patients who underwent bile outflow restoration of choledochal outflow obstruction of the terminal section (choledochodenoanastamosis according to the developed by us  procedure (Kazakhstan patent №108142, Algorithm of diagnostics and surgical treatment tactics of benign genesis obstructive jaundice - Author's certificate № 24754. Control group consisted of 18 (51.4%) patients who underwent cholecystectomy, choledocholithiasis by Jurash-Vinogradov and applied conventional algorithm of diagnostics and treatment of multiple choledocholithiasis with benign genesis obstructive jaundice. We assessed complications of procedures according to Clavien-Dindo  and pain intensity level using visual analog score in both groups.

The developed technique for the surgical treatment of choledocholithiasis in cholelithiasis ensures the restoration of bile outflow in the duodenum, normalizes its morphofunctional state, prevents the development of various postoperative complications, in particular, there was no leakage and bleeding from the choledochoduodenoanastomosis in the main group.

This is an important problem in biliary tract surgery (5). Repeated interventions are not uncommon in choledocholithiasis and there is a relatively high mortality after them (6, 7). In recent years, with the accumulation of experience in endoscopic surgery of choledocholithiasis, new approaches have emerged aimed at wider application of sphincter-preserving interventions (8).

The treatment of choledocholithiasis is multivariate and each method has both advantages and disadvantages, therefore rational tactical approaches and the search for new technical solutions for the removal of biliary tract concretions are required (9).

Mechanical jaundice is the most common and severe syndrome of surgical diseases of the hepatopancreatobiliary zone with a frequency ranging from 4.8% to 83%, with severe complications of MJ, such as purulent cholangitis, systemic inflammatory response syndrome, sepsis, as well as multiple organ dysfunction (10) and mortality in emergency operations reaches 15-30% (11). Surgical operations for choledocholithiasis performed in an emergency order in patients are accompanied by a large number of complications, and the mortality rate reaches 15-30% (12). Unsatisfactory results of treatment of this category of patients are also due to a number of socio-economic factors:

1) low sanitary culture of the population, and hence the refusal of timely surgery and late access to medical care;

2) insufficient competence of doctors of the general hospital and polyclinic network in relation to choledocholithiasis, its clinical manifestations, diagnosis and surgical tactics;

3) new technologies in the diagnosis and treatment of this disease have not yet received widerecognition, especially by peripheral medical institutions in Kazakhstan.

Our research has allowed us to outline the most rational ways of treating patients in modern conditions. In our work, we focus on the "golden mean" - a combination of phased minimally invasive interventions with standard ones. We developed minimal invasive method of treatment of benign jaundice choledochoduodenoanastomosis (CDA) and algorithm of treatment tactic (1-3).

The  aim of the study was to evaluate the outcomes as postoperative complications and pain intensity level after application of the developed by us algorithm of surgical tactics and choledochoduodenoanastomosis using a minimally invasive approach as compared to conventional surgery in patients with cholelithiasis, cholangitis and benign genesis obstructive jaundice (BGOJ).

The design of the study is a single center clinical prospective study.

Overall  35 patients with cholelithiasis, cholangitis and  BGOJ, hospitalized at the Department of Surgery at University Hospital of Semey Medical University from 2020 to 2021 were included in the study.

All patients were examined and their treatment tactics were determined according to the developed «Diagnostic and surgical treatment algorithm for benign genesis obstructive jaundice» (2, 3).

Criteria for inclusion in the study:

3. Obtaining the informed consent of the patient for surgical treatment by the proposed method and the study of the obtained data in a scientific study.

Criteria for exclusion from the study:

1. Patients with obstructive jaundice with malignant genesis of the hepatobiliary region.

2. Refusing to participate in the study.

4. Pregnancy III-IV trimester and during lactation.

The study main group consisted of 17 (48.6%) patients with choledochal outflow obstruction of the terminal section who underwent bile outflow restoration - choledochoduodenoanastomosis (CDA) according to the developed by us minimal invasive  procedure (Kazakhstan patent №108142) [1) and applied the developed "Algorithm of diagnostics and surgical treatment tactics of benign genesis obstructive jaundice" (Author's certificate № 24754)(2, 3).

The study follows the principles of the Declaration of Helsinki. In the study, all patients were informed about the upcoming treatment method and gave informed consent.

The article complies with institutional guidelines for human research and is based on the experience of the adult surgical department of the University Hospital of Non-Commercial Joint Stock Company "Semey Medical University", on the clinical bases of the Department of Hospital and Pediatric Surgery.

All the patients underwent clinical, laboratory and ultrasound examinations, computed tomography of abdomen if and echosonography and retrograde cholangiopancreatography (ERCPC) if necessary – see algorithm in Results section.

The complications of surgical procedures were evaluated using Clavien-Dindo classification (13) that describes postoperative complications. This includes seroma, postoperative bleeding, anastomotic leaks. Seroma is an accumulation of tissue fluid in the subcutaneous tissue of a sutured wound. This complication is a consequence of one of two defects in hemostasis during intrapleural surgery, surgical or biochemical. Bleeding the release of blood outside the vascular bed or heart into the body cavity or the lumen of a hollow organ.

Assessment of paint intensity after procedures was done using  visual analogue scale (VAS) is designed to measure the intensity of pain. It is a continuous scale in the form of a horizontal or vertical line 10 cm (100 mm) long, with two extreme points located on it: “no pain” and “worst pain imaginable.”

Choledodochoduodenoanastomosis – developed by us  operation involves the imposition of an anastomosis after a longitudinal dissection of the common bile  duct and a transverse opening of the duodenum, usually with a single row suture  (see details in results section).  All patients underwent fistulocholangiography after surgery.

We used Chi-square and Fisher tests to define significance of difference in the severity of disease, rate of complications and pain intensity level, p<0.05 was accepted as significant level.

As seen from Table 1, there were equal numbers of young, middle-aged and elderly patients in both groups, with the age group over 45 years predominating with a relative number of 45.7% (n=16). Mechanical jaundice syndrome was least frequently found in patients in the age group of 18 to 44 years old – 17.1% (n=6). The average age of patients in the study group was 53.3 (1.1) years, in the control group – 54.1 (2.1) years, i.e. there were no differences between the examined groups. The age and sex composition of the study and control groups were completely equivalent.

The developed algorithm is shown in Scheme 1.

Based on literature data, we developed an algorithm for determining the tactics of diagnostic and surgical treatment of BGOJ based on laboratory, analysis of ultrasound diagnostics and computed tomography. The treatment algorithms proposed by other authors are difficult for the practitioners to accept and understand, because they are not systematized. 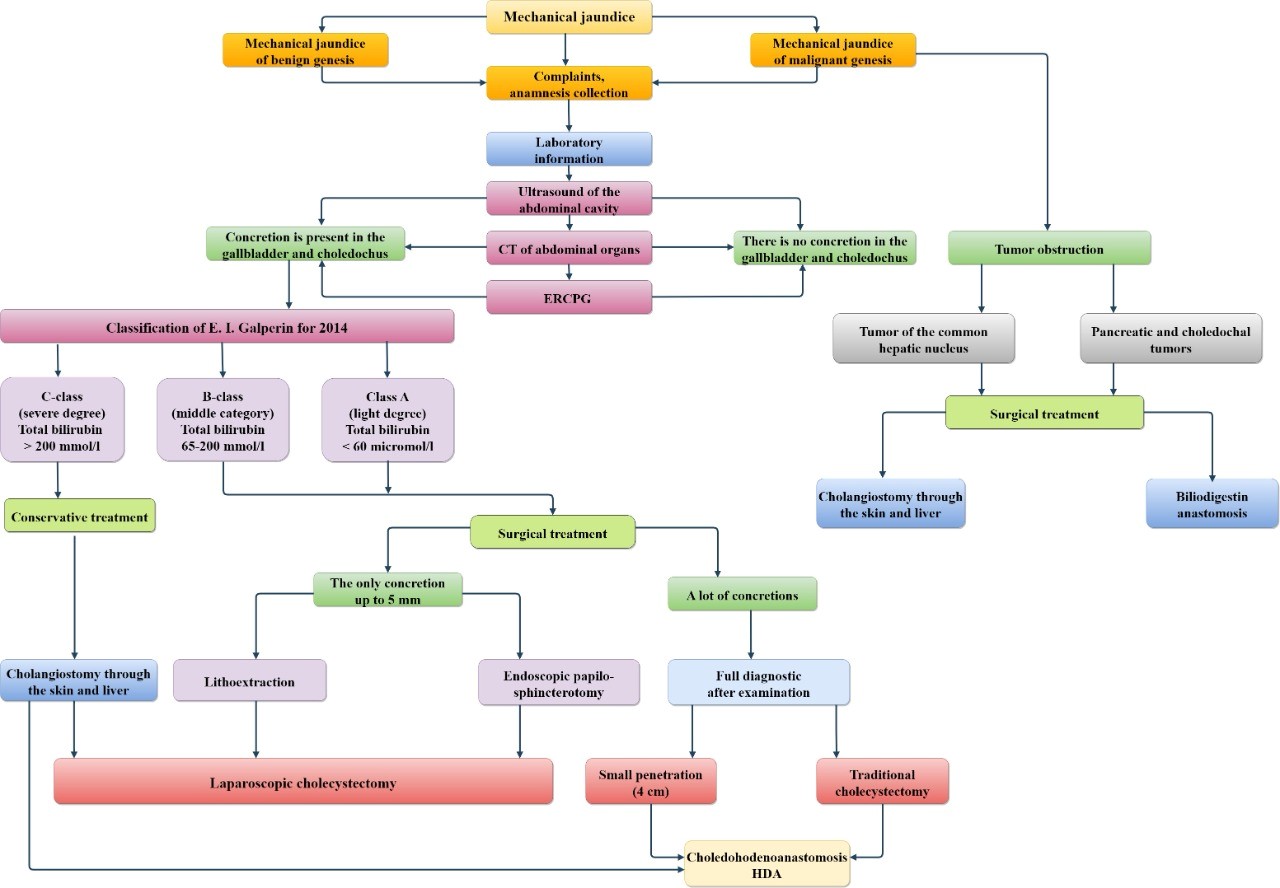 This is because they require periodic treatment due to etiopathogenetic features of this severe pathology. Therefore, we recommend using the following abbreviated algorithm for diagnosis and treatment according to severity (Fig. 1).

According to the suggested algorithm, the usual clinical, laboratory and instrumental examinations are performed when a patient is admitted to the surgical department. First, the patient's complaints are identified, a medical history is taken, an objective examination is carried out, and a predictive diagnosis is made on the basis of the patient's data. An ultrasound of the abdomen and a computed tomography scan in severe cases are recommended to determine the underlying cause. This reveals the presence of concrements in the biliary bladder and choledochus and obstruction by a tumour.Tumoural obstruction is classified as advanced hepatocellular carcinoma and pancreatic and choledochal cancer. The main treatment in this case is surgery. As a rule, a percutaneous hepatic cholangiostomy should be performed for hepatocellular carcinoma and a biliodigestive anastomosis for pancreatic and choledochal tumours.

Patients with multiple choledocholithiasis complicated by BGOJ were admitted to the hospital both as an emergency and as planned, as shown in Table 2. Thirty patients (85.7%) were admitted to the hospital as an emergency and rest as planned hospitalization. There was no difference in the distribution of this indicator among the allocated groups (χ2=0.016, р>0.1).

Guided by the classification of E.I. Galperin (2014), the severity of patients with multiple choledocholithiasis

complicated by BGOJ syndrome was assessed. Table 3 shows the results of the distribution of patients in the study and comparison groups according to the severity of BGOJ and  there were no differences between groups (p>0.05).

The duration of mechanical jaundice from the time of onset to hospital admission varied from 3 days to 5 months.

In the control group of 18 patients the surgery was performed using Prudkov Liga-7 device in 12 (66.7%) patients, and upper midline laparotomy in 6 (33.3%) patients. Surgery: cholecystectomy, cholangiography, choledochotomy, removal of choledochal stones, fibrocholedochoscopy, CDL according to Jurash-Vinogradov.

All patients underwent postoperative fistulocholangiography on the day 7. 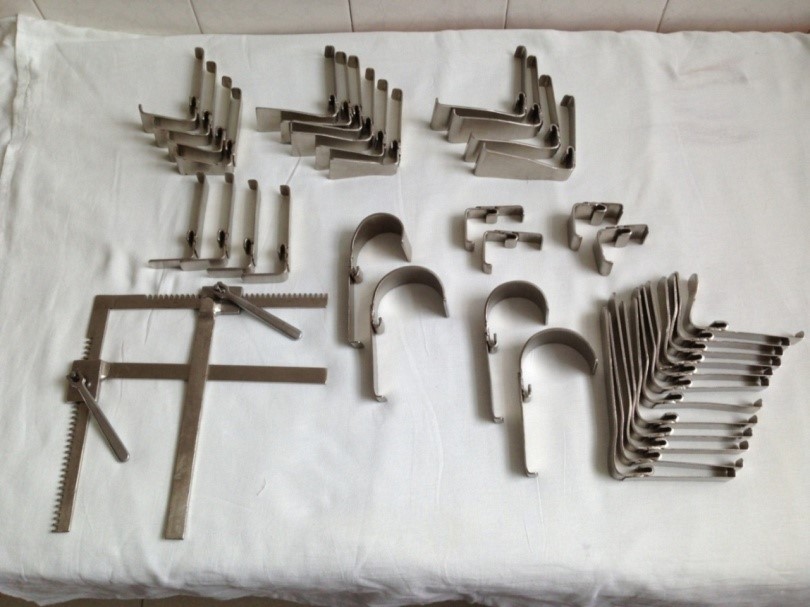 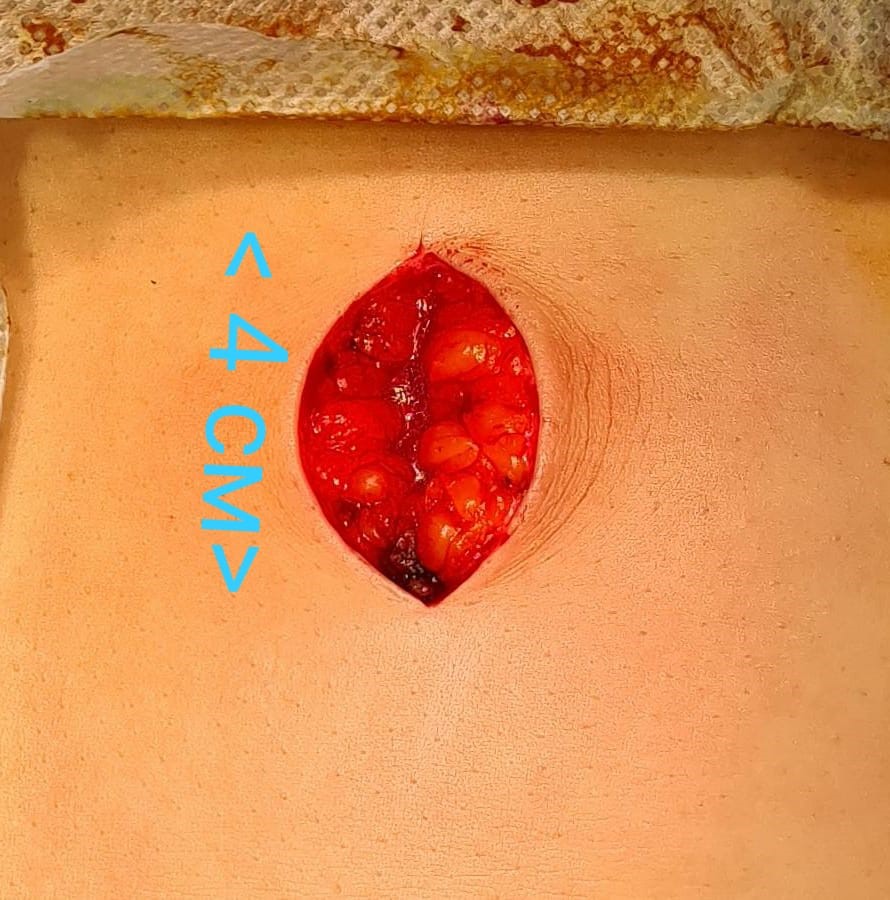 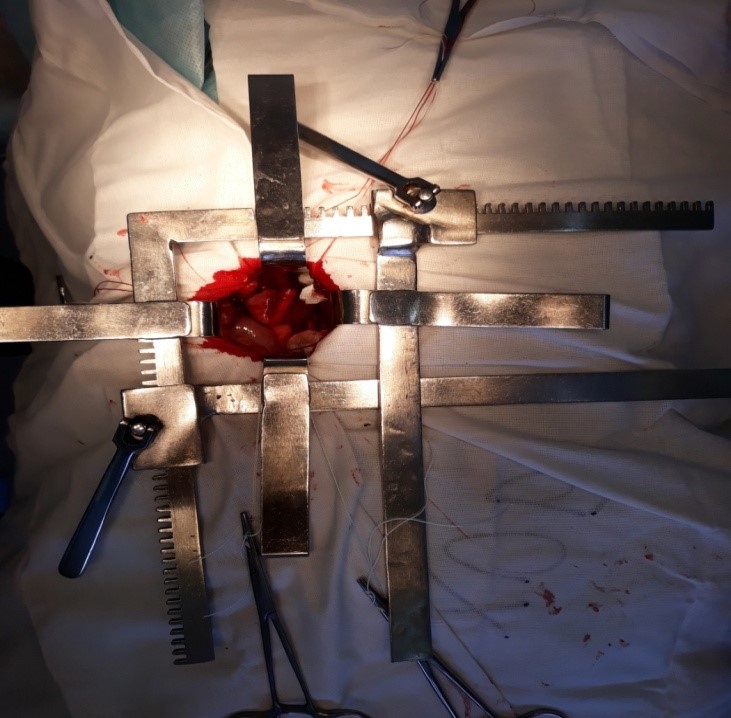 Figure 4. Usage of the versatile wound expander from the mini-access during surgery 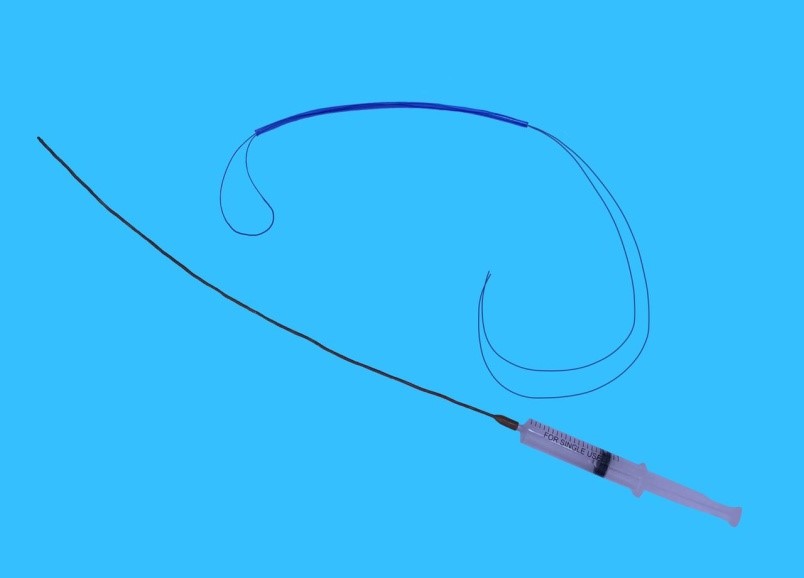 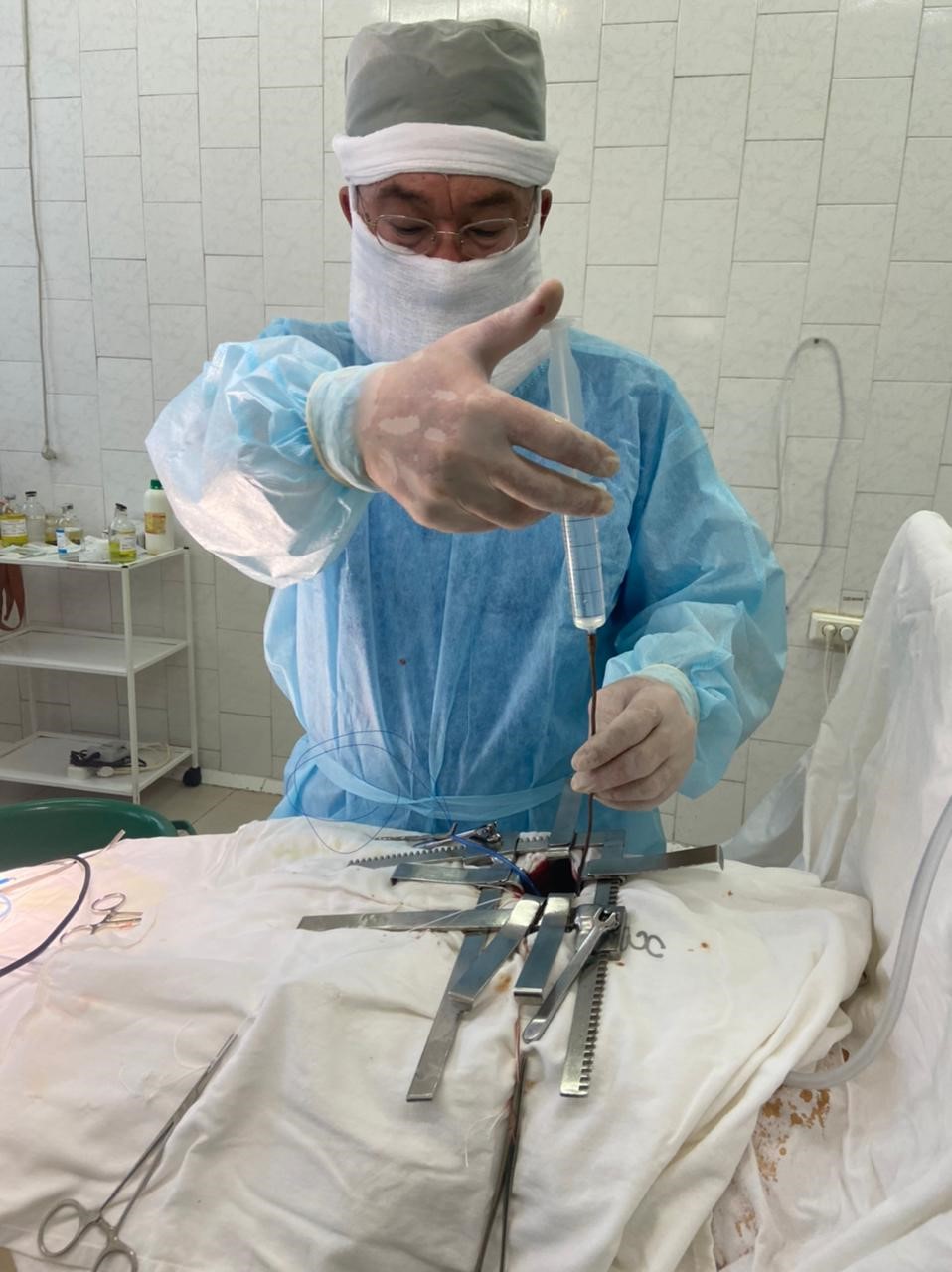 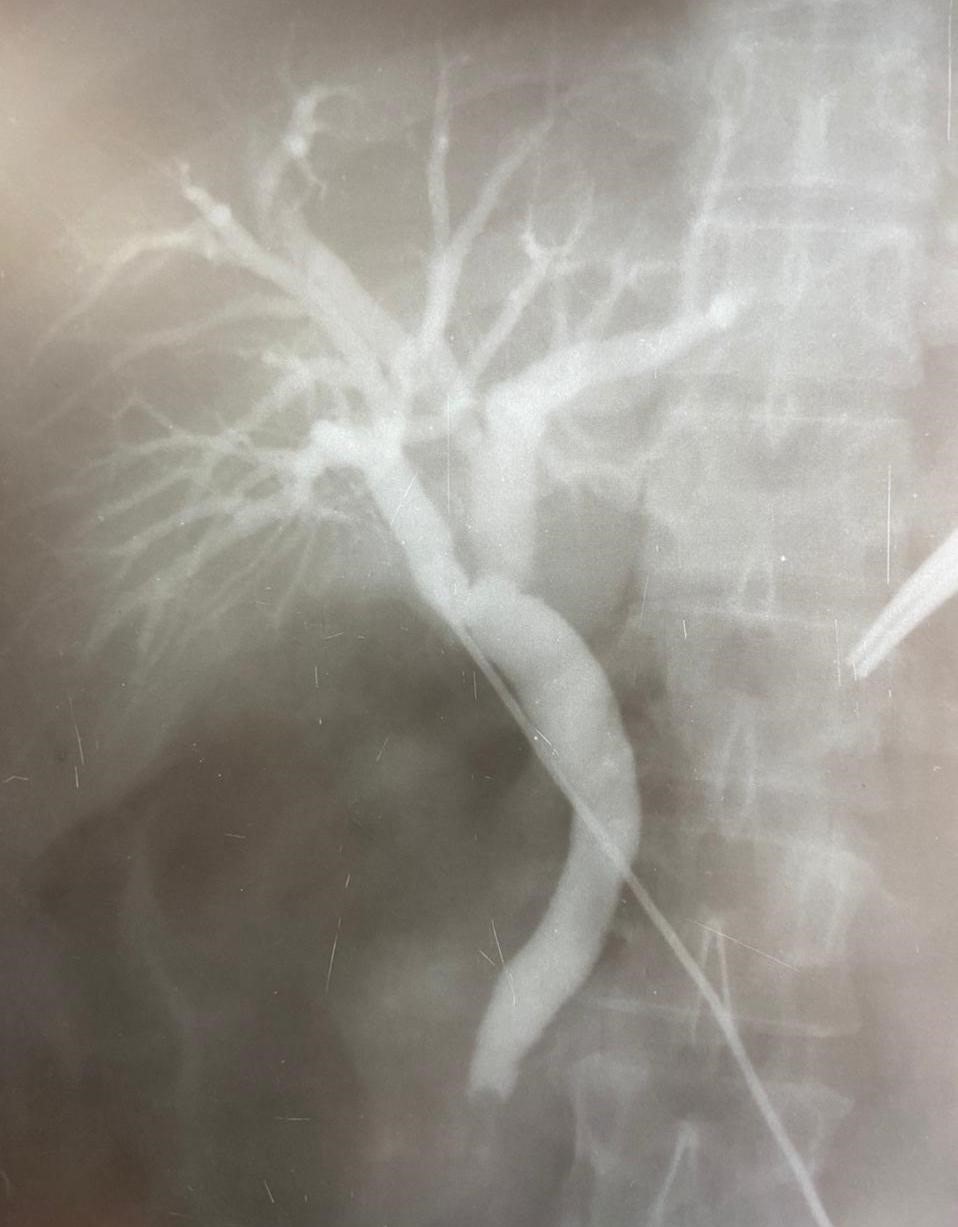 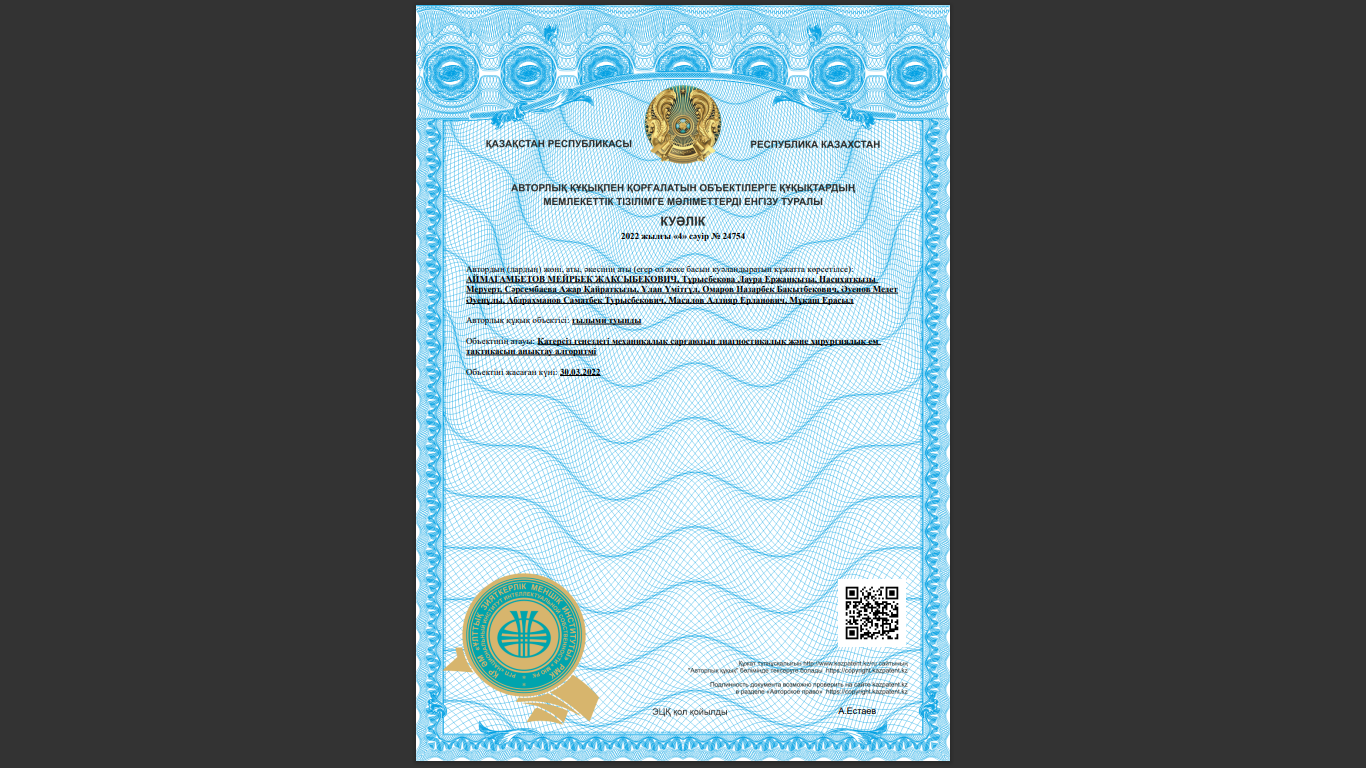 Analysis the level of pain syndrome, assessed using the Visiual Analog Scale (VAS) (Fig.9) that there were differences between the degree of pain syndrome in the study group which was significantly less on day 3, 7 and on hospital discharge (p<0.05). The study group had by 28.9% lesser pain intensity  on the 3rd day, up to 38.7% after 7 days and up to 72.7% at the time of the patient's discharge than patients after conventional surgery.

The Clavien-Dindo scale (Table 4) was used to assess the severity of postoperative complications.

There was no mortality in the study and control groups.

Our study demonstrated that proposed by us method is accompanied by less complications rate and pain intensity after surgery as compared with conventional surgery types. When analyzing the results of the study according to the Clavien–Dindo classification, differences in the results of the study were revealed, in particular, the frequency of postoperative complications in the study group decreased. There were also no deaths in the study group and in the control group.

When comparing the intensity of pain syndrome in both groups, pain intensity was by 72.7% lesser in the study group than in control group at the time of the patient's discharge from the hospital.

Thus, we consider our method adequate in view of the higher frequency and severity of complications when using traditional methods of surgical treatment.

Main limitation of the study is the small number of patients.

The developed technique for the surgical treatment of choledocholithiasis in cholelithiasis ensures the restoration of bile outflow in the duodenum, normalizes its morphofunctional state, prevents the development of various postoperative complications, in particular, there was no leakage and bleeding from the choledochoduodenoanastomosis in the main group. And the presence of seroma and bleeding in the postoperative wound was the same. The applied procedure was accompanied by less pain intensity after surgery as compared to conventional types.