Objective: Patients with rheumatic mitral stenosis, despite having normal left ventricular ejection fraction (LV EF), have ventricular dysfunction in the form of impaired longitudinal excursion. Tissue Doppler velocity is a useful indicator for assessment of long-axis ventricular shortening and lengthening.

The aim  of our study was to evaluate the effect of percutaneous balloon mitral valvuloplasty (PBMV) on LV function in rheumatic MS and to study echocardiographic parameters with M-Mode and Tissue Doppler Imaging pre PBMV, post PBMV and on follow-up to determine predictors of LV function.

Methods: We analysed 52 patients with severe mitral stenosis with normal LV EF, who underwent PBMV at our institute. Baseline parameters of LV function were compared with immediate post PBMV and at three months follow up.

Up to 21% of patients with mitral stenosis (MS) have impaired  left ventricular (LV) function (1). Different mechanisms of LV dysfunction have been elucidated. Decreased compliance due to recurrent myocardial inflammation as in recurrent carditis, is one such mechanisms (2). Also, rheumatic affection of subvalvular apparatus can lead to tethering of postero-basal LV and wall motion abnormalities (3). Abnormal interventricular interdependence due to paradoxical movement of septum and abnormal right ventricular (RV) function due to pulmonary hypertension (PH) has also been shown to cause LV dysfunction (4). Atrial fibrillation has also been shown to cause impairment of LV function. Comorbidities such as systemic hypertension and coronary artery disease (CAD) may also lead to LV dysfunction.

Altered LV long-axis movement has been shown to be a sensitive indicator of early myocardial dysfunction. Pulsed-wave Doppler tissue velocities have been proven to be a good tool for assessment of long-axis ventricular shortening and lengthening (9,10).

The aim  of our study was to evaluate the effect of PBMV on LV function in rheumatic MS and to study echocardiographic parameters with M-Mode and Tissue Doppler Imaging pre PBMV, post PBMV and on follow-up to determine predictors of LV dysfunction.

This was a prospective observational study conducted U.N. Mehta Institute, Ahmedabad, Gujarat, India, which is a tertiary care centre. Patients with severe MS with normal LVEF undergoing PBMV from August 2016 to March 2019 were screened. Patients with concomitant moderate to severe mitral regurgitation, concomitant involvement of other valves, coronary artery disease as evidenced by electrocardiogram (ECG), 2D echocardiogram or coronary angiogram (CAG), hypertension and diabetes mellitus were excluded. Of a total of 72 patients were screened, 5 had hypertension, 3 had diabetes mellitus, and 12 patients were excluded due to significant other valve involvement.

A total of 52 patients with severe mitral stenosis of rheumatic affection were enrolled.

Data were collected after obtaining written, informed consent from the patients and their one close relative; and after approval from institutional Ethics committee.

All patients underwent clinical and laboratory examinations and following data were collected: demographic parameters as age, sex, INR level, and presence of atrial fibrillation and duration of disease.

Echocardiography was done by Vivid GE machine, using probe frequency range of 2–4 MHz by a single investigator. For patients in atrial fibrillation, a mean of measurements in five consecutive cardiac cycles was taken.

Mitral annular plane systolic excursion (MAPSE) was measured by M-mode images obtained at the LV septal and lateral annulus in 4-chamber view, and an average MAPSE value was calculated (Fig. 3).

According to European Society of Cardiology (ESC), PBMV is a Class I indication in all symptomatic patients with MVA less than 1.5 cm2 without any unfavourable characteristics or with high surgical risk. Unfavourable characteristics for PBMV include old age, history of prior intervention, New York Heart Association (NYHA) class IV symptoms, permanent AF, severe pulmonary hypertension, Wilkins’ score >8, calcification of mitral valve as assessed by fluoroscopy, and severe tricuspid regurgitation.  In asymptomatic patients, it may be considered in patients with high risk of thromboembolism or have a greater risk of hemodynamic decompensation (11). 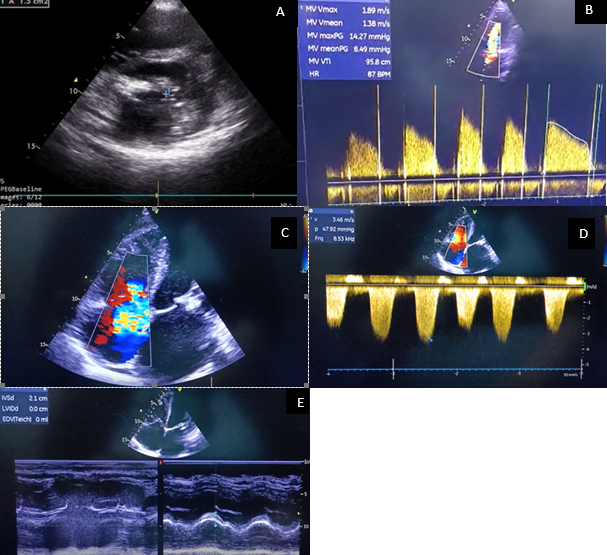 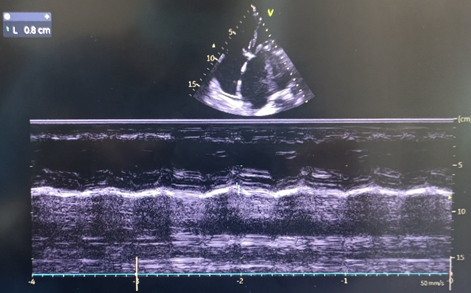 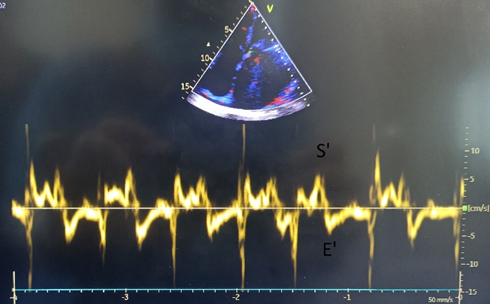 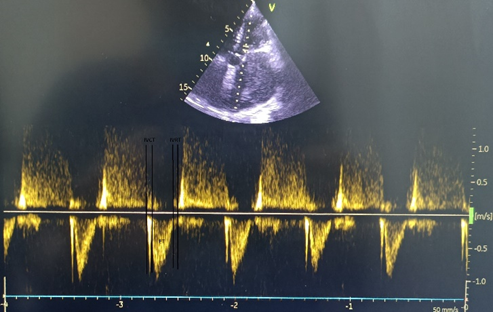 PBMV was regarded as successful if the mitral valve  area post procedure increased to >1.5 cm2; or the gain in MVA was >50% of baseline with not more than grade II mitral regurgitation (12).

All statistical studies were carried out using Statistical Package for Social Sciences (SPSS vs.22.0). Quantitative variables were expressed as the mean (standard deviation) and qualitative variables were expressed as percentage (%). A comparison of parametric values between two groups was performed using the independent sample t test. Categorical variables were compared using the Chi-square test and were presented as frequencies and percentage.  Comparison of repeated measures was performed using Friedman test. Logistic regression was used to predict the different risk factors for presence of left ventricular dysfunction  determined by longitudinal tissue Doppler velocity (E’ < 8 cm/s) (13). The predictive diagnostic value of pre BMV MPI for LV dysfunction was calculated using the receiver operating characteristic (ROC) curve.  A nominal significance was taken as a two tailed p value<0.05.

The baseline characteristics of study population is shown in Table 1.

There was no significant difference in the baseline LV parameters of patients in atrial fibrillation and those in sinus rhythm as shown in Table 3.

Predictors of improvement in LV function

Immediately post PBMV, LV function improved in 24 (77.4%) of patients with LV dysfunction and the remaining 7 patients had improved function at 3 months follow up. 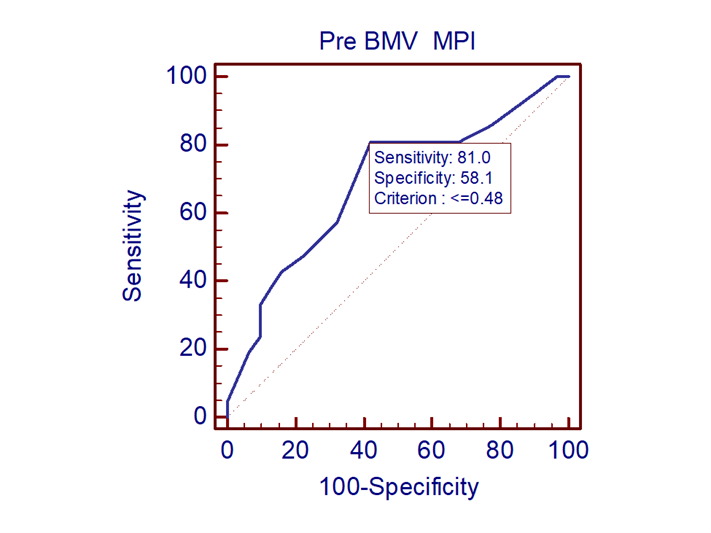 Our study demonstrated that among various echocardiographic indices MPI was a predictor of LV dysfunction defined by low mitral annular velocity during diastole after PBMV. Pre PBMV MPI value < 0.48  predicted improvement of LV function after procedure with good sensitivity.

The evaluation of effect of valve dysfunction on isovolumic contraction time, isovolumic relaxation time and ejection time has not been well studied before. Analysis of MPI, thus helps in understanding the pathophysiological changes in LV due to valve dysfunction. Since it takes into account both systolic and diastolic function of LV, it is a better predictor of global LV function.

2D Echocardiography has been the gold standard for evaluation of valvular heart disease. When transthoracic echocardiogram (TTE) images are inadequate, transesophageal echocardiography (TEE) is useful for assessing global as well as regional systolic and diastolic LV function, valve area and morphology (14). 3D echocardiography and 3D strain parameters provide valuable assessment of LV myocardial dynamics (15). Furthermore, unlike 2D echocardiogram and M-mode, which makes incorrect geometric assumptions about LV, 3D echocardiography allows us to see the LV as it is. It has better reproducibility and good correlation with LV mass, volume and LVEF (16). With respect to LV function, mitral valve area and aortic valve area, cardiac magnetic resonance imaging has also been found to be accurate with a coefficient of correlation being 0.82, 0.98 and 0.92 respectively. However, due to limitations of technology and lengthy imaging time, the role of cardiac magnetic resonance imaging is, at best, only complimentary to 2D Echocardiography (17).

Similar to our study, Ozer et al. (5) demonstrated in their study, that the displacement of mitral annulus towards the apex, denoting the longitudinal motion of LV is impaired, as measured by tissue Doppler velocity, despite normal global systolic functions.

This was attributed to the longitudinal orientation of myofibrils in the endocardium and the chief affection of rheumatic activity at the endocardium. Guven et al. (23) also showed impaired LV longitudinal motion in patients with moderate to severe MS; by using tissue Doppler velocity, and attributed it to discordant longitudinal and circumferential fibres of LV.  Hady et al. (20) demonstrated LV dysfunction to be present in rheumatic MS, irrespective of the patient being in sinus rhythm or atrial fibrillation.

MAPSE is an M-mode parameter correlating with movement of mitral annulus. On the other hand, S’ and E’ correlate with mitral annular velocity. Patients with preserved LV EF are likely to have normal overall excursion of mitral annulus as measured by MAPSE. Despite no significant increase in MAPSE, PBMV increases the velocity of excursion, thus decreasing the isovolumic contraction time and increasing the ejection time. Hence, there is an increase in S’, E’ and decrease in MPI.

Commissurotomy results in mechanical relief of LV inflow obstruction and increased preload of LV that could explain the immediate improvement in LV function and continuous benefit noted on follow up. Mobilization of mitral apparatus may result in better compliance of the ventricle. The improvement in MPI suggests improvement in both systolic and diastolic functions of LV.

Predictors of improvement in LV function

Post intervention LV dysfunction is estimated to be seen in 16.8% of patients (26). Hence, prediction of improvement in LV function is important in prognostication of patients. In our study, pre BMV MPI < 0.48 correlated with better post PBMV outcomes because overall preserved LV systolic and diastolic function can be expected to have better outcomes. This is in concordance to a study by Rajesh et al., who also suggested that a PBMV done prior to a significantly worsened LV function yielded better outcomes.

1.The study was done in a single centre providing care to relatively racially homogenous population due to a restricted geographic area; and therefore the results might not be applicable in other settings.

2.LV strain imaging which is a good indicator of LV function was not done.

3. The sample size of the study was relatively small, further studies on larger population should be sought.

Patients with mitral stenosis have impaired LV function despite having normal LV EF. Longitudinal motion improves immediately post PBMV and can be assessed by MASV and MPI. An MPI < 0.48 predicts better LV function post PBMV with a sensitivity of 81% and specificity of 58.1%.

Ethics: Informed consent was obtained from patients before enrollment to the study and study protocol was approved by Ethics committee of our institution