Objective: The advancement in percutaneous transluminal coronary angioplasty (PTCA) has led to it becoming the predominant mode of revascularization. Post PTCA adverse events in the form of stent thrombosis, recurrent ischemia, unplanned revascularization, recurrent hospitalization etc. result in morbidity as well as mortality. Biomarkers predicting such outcomes can be useful in initiating more aggressive medical therapy and greater modification of risk factors. This study was undertaken to study the predictive significance of periprocedural plasma fibrinogen levels for coronary stenting outcomes.

Traditionally, percutaneous coronary intervention (PCI) has become a common treatment of coronary artery disease (CAD). Early recoil, alteration in blood vessels, release of vasoactive and thrombogenic factors and neo-intimal proliferation have been suggested as significant contributors to the restenosis after coronary angioplasty (1, 2).

Plasma fibrinogen is an acute phase reactant with known inflammatory mechanism, but it also affects platelet aggregation and blood viscosity (3, 4).  Inflammation leads to development of neo-intimal hyperplasia which results in restenosis of the stented vessels. Many inflammatory molecules have been studied as potential indicators of CAD risk.

These include the cytokines (tumor necrosis factor –alpha (TNF-alpha), interleukin (IL)-1-beta, IL-10 and IL-6), endothelial activation markers (E-selectin and vascular cell adhesion molecule (VCAM)-1), circulating adhesion proteins etc. These are produced in liver and increase or decrease in response to inflammatory stimuli (5). Serum fibrinogen, serum amyloid A, and high sensitivity C-reactive protein (hs-CRP) are among the acute-phase proteins that increase during inflammation and have been studied as predictors of CAD. Certain markers like adiponectin and IL-10 are downregulated in inflammation (6).

Fibrinogen levels have correlated positively with number of diseased vessels as well as the severity of CAD. In addition, in patients with chronic  stable angina (CSA) without any known coronary risk factors, fibrinogen was the strongest predictor of global coronary score, number and severity of coronary artery stenosis (7).

Although epidemiological studies have evaluated role of fibrinogen in CAD, there are still aspects that need further investigation.

Hence, this study was undertaken to evaluate predictive significance and diagnostic accuracy of fibrinogen in stent outcomes in patients who underwent elective PTCA for acute coronary syndrome (ACS) or CSA.

This is a prospective observational study of 80 consecutive patients fulfilling the inclusion and exclusion criteria. It was conducted between November 2016 and January 2019 at a tertiary cardiac care hospital in Ahmedabad, Gujarat, India.

-All patients with CSA who underwent elective PCI.

-All patients with ACS including UA and NSTEMI who underwent elective PCI.

-All patients with hemodynamically stable ST elevation myocardial infarction (STEMI) who were late presenters (out of window period) and underwent PCI minimum 72 hours after presentation.

-Patients with STEMI  of less than 72 hours on presentation

-Patients who were late presenters of STEMI but had any indication for rescue PTCA like arrhythmia or hemodynamic instability.

-Patients with any active infection.

-Patients with use of intravenous glycoprotein IIb/IIIa inhibitor prior to or during the PCI.

Coronary stenting was done either using radial or femoral route under a local anesthetic agent. All patients underwent PTCA with the use of a second-generation drug eluting stent (DES). The stent size was assessed angiographically and depended on the discretion of the interventional cardiologist. Patency of the vessel was assessed by coronary angiography after the procedure was completed. Thrombolysis in myocardial infarction (TIMI) 3 flow was achieved in all.

All patients who underwent PTCA received loading dose of tablet clopidogrel 300 mg and tablet aspirin 300 mg prior to the procedure. Intravenous heparin was given during the procedure. Intravenous or intracoronary glycoprotein  IIb/IIIa inhibitor was not used. Post PTCA patient received tablet aspirin 150mg, second antiplatelet drug (either clopidogrel, prasugrel or ticagrelor at the discretion of treating cardiologist) and statin for minimum of six months. 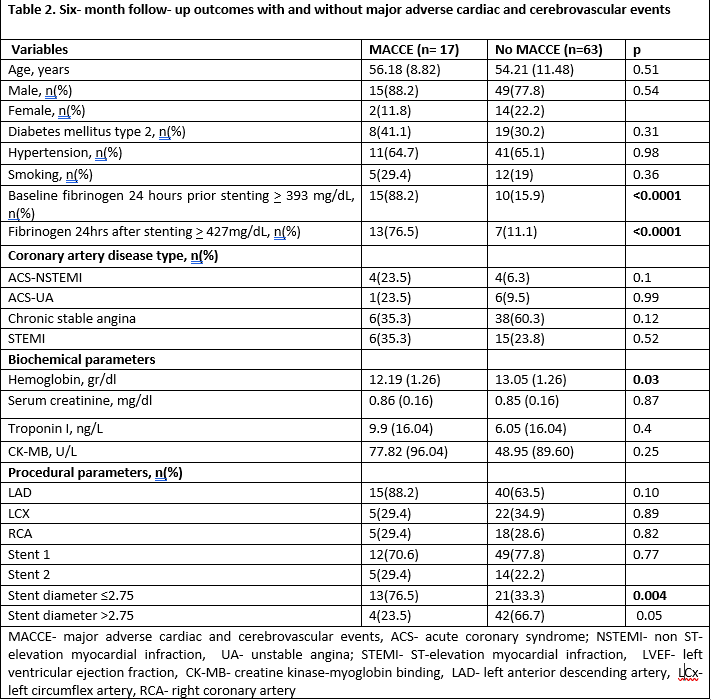 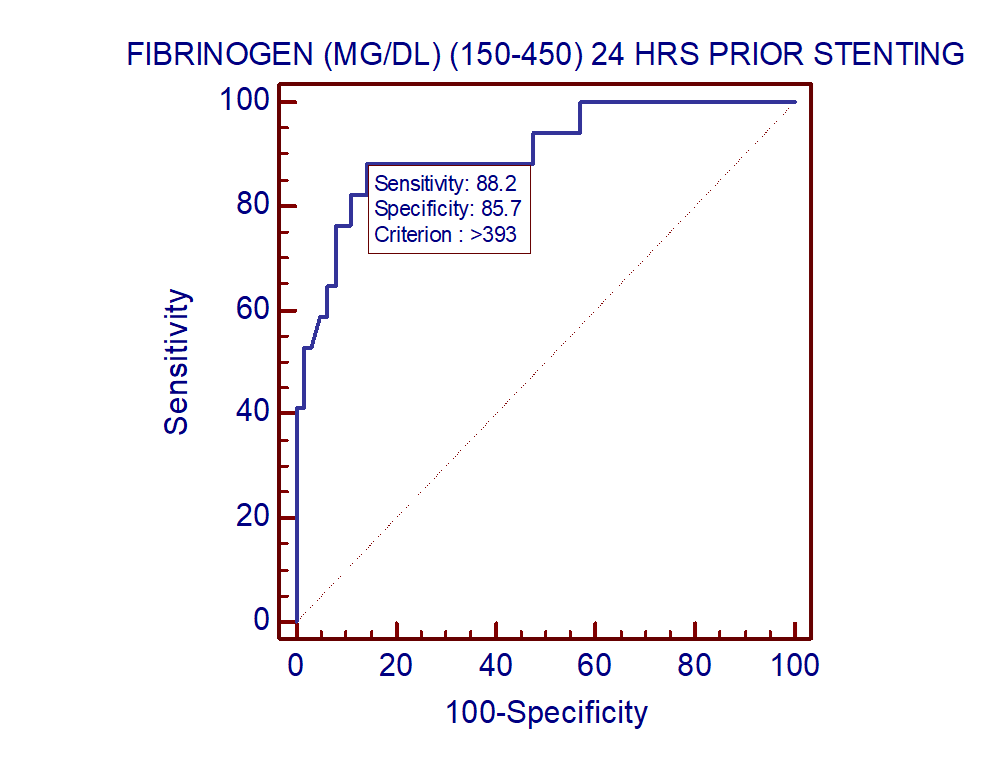 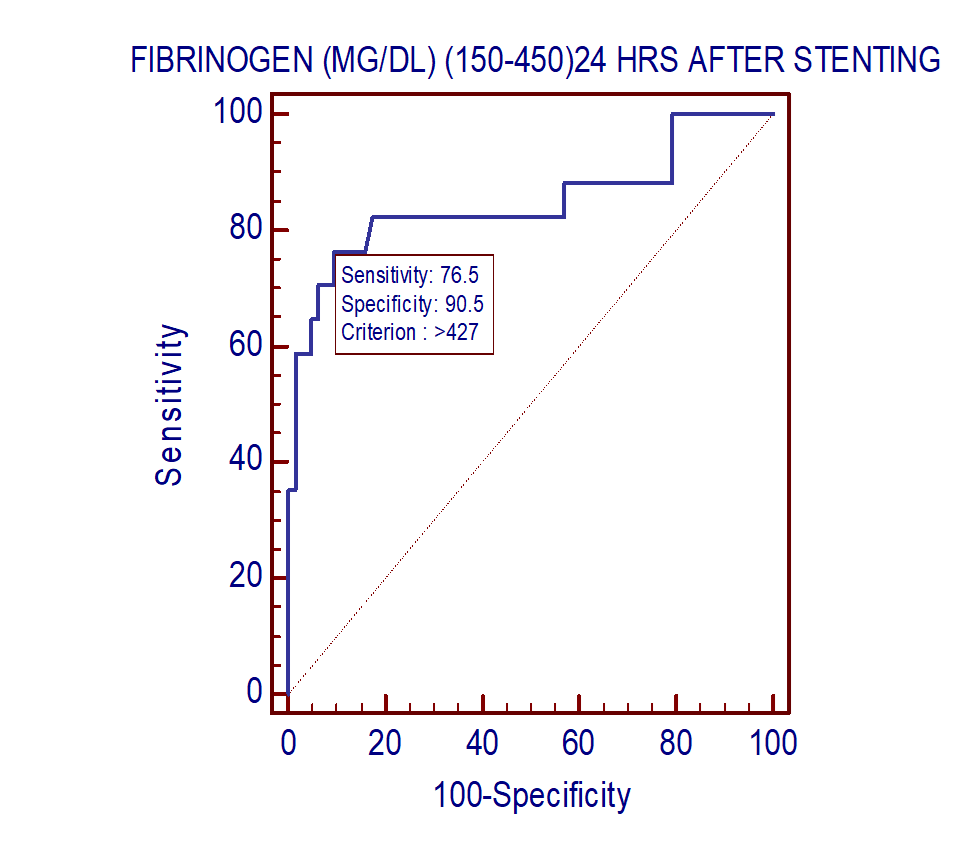 The current study demonstrates that higher level of periprocedural plasma fibrinogen is seen more in patients with MACCE after elective PTCA. Also, use of small calibre stents was associated with higher MACCE, but neither the stent length nor the presenting event for PTCA was associated with MACCE.

Fibrinogen as predictor of MACCE

In a study by Otsuka et al. (11), patients with pre-procedural fibrinogen level >345 mg/dL had greater occurrence of cardiac death, target vessel myocardial infarction and target lesion revascularization after undergoing PTCA. They concluded that higher pre-procedural fibrinogen level was an independent predictor of coronary stent outcome (11). Another study by Mahmud et al. (12) showed that baseline fibrinogen value greater than 360.2 (135.5) mg/dL was associated with higher MACCE after PCI in the form of periprocedural myocardial infarction, re-hospitalization for ACS, urgent revascularization, stroke and death (12). The Dual Antiplatelet Therapy (DAPT) study also identified multiple factors predicting late ischemic events including the use of smaller-diameter stents, similar to the current study (13). Studies by Germing et al and Rahel et al, also suggested increased levels of fibrinogen to be associated with adverse cardiac events after intracoronary stenting (14, 15) Song et al. (16) also reported higher fibrinogen level to predict death or nonfatal re-infarction in patients who underwent PCI (16). Long term outcome of fibrinogen was also assessed in a study by Yuan et al. (17). Elevated fibrinogen levels were associated with all-cause mortality and cardiac mortality at median follow up of 5.1 years. It is possible that a higher fibrinogen threshold predicts ischemic risk during PTCA due to administration of potent antiplatelet and anticoagulant therapy, while a lower threshold might be associated with longer-term MACCE.

Fibrinogen has several effects in the event of atherosclerosis. It can infiltrate into the arterial wall and bind low-density cholesterol and other clotting factors. Fibrinogen degradation products (FDP) stimulate smooth muscle cell proliferation in tunica media and loading of cholesterol in macrophages. It elevates plasma viscosity due to higher molecular weight and asymmetricity. Fibrinogen binds to red cells and stimulates red cell accumulation further increasing plasma viscosity. Fibrinogen increases adhesion of leukocytes and platelets to coronary plaques by interaction with ICAM-1 on leukocytes and endothelial cells. It increases platelet aggregation by binding to platelet Gp IIb/IIIa. It also increases platelet reactivity. It also participates in later stages of coagulation cascade leading to thrombosis (3, 4).

A better understanding of other fibrinogen characteristics such as concentration variation with age or clinical presentation, variation in isoforms, intracellular storage and release and binding characteristics may further refine the relations between an elevated fibrinogen level and MACCE after PTCA.

Only incidence of adverse events during six-month follow- up was assessed. Longer outcomes need to be assessed. Angiographic follow-up was not done and hence percentage of restenosis was not determined. Post-PCI dual antiplatelet therapy and thienopyridine selection was determined at time of discharge after index procedure and may have been subsequently modified.

Ethics: Informed consent was obtained from all individual participants

The study has been approved by the institutional ethics committee (UNMICRC/CARDIO/2016/14).

Acknowledgement and funding: This work was supported by U. N. Mehta Institute of Cardiology and Research Centre itself and received no specific grant from any funding agency, commercial or not for profit sectors