In most cases, coronary artery anomalies are not detected clinically because either they do not manifest by symptoms or the sudden death is the first and last sign of the disease. Less than 30% of adult population has symptoms before the establishing diagnosis of coronary artery anomaly. More often anomaly of coronary artery is a random finding during imaging study, coronary angiography and autopsy. The certain forms of anomalies are associated with the risk of sudden death and myocardial ischemia. Origin of left main coronary artery and RCA from opposite sinus of Valsalva with further course of anomalous vessels between aorta and pulmonary artery trunk often is linked to sudden death. Specifically, this anomaly is characterized by aberrant coronary artery with split ostium and course in proximal part with obtuse angle. In such kind of anomaly, the artery during physical exertion distends with impairment of blood supply through narrow origin. Increase in stroke volume during physical exertion is related to stretching of aorta and pulmonary trunk, which also contributes to blood flow reduction in anomalous artery (5).

The aim of our case report is to describe rare anomaly of coronary artery origin concomitant with aortic root aneurysm, as well as to present the results of surgical correction of this pathology.

A 61-year-old patient on 23.02.2018 was admitted to cardiac surgery department of AN Syzganov NNCS with complaints on periodic burning chest pain spreading to the left arm, overall weakness,   rapid fatigue, and periodic headache.

Diagnosis of coronary artery disease had been established 2 months before hospitalization when due to sharp chest pain of burning character and dyspnea, the patient called ambulance. He was hospitalized to the Almaty hospital with diagnosis of acute coronary syndrome without ST elevation. He received aspirin 325 mg, heparin 5000 U iv and nitrates infusion on pre-hospital stage in ambulance. He was hospitalized to the roentgeno-surgical department of the hospital. On admission his chest pain relieved and he was scheduled to  coronary angiography. Diagnosis of left ventricular anterior wall non-ST-elevation myocardial infarction was established. He received treatment. At the same hospital the aneurysm of ascending aorta was diagnosed on echocardiography and after consultation of cardiac surgeon from AN Syzganov NNCS he was scheduled for cardiac surgery. 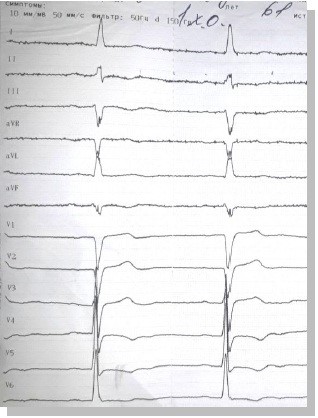 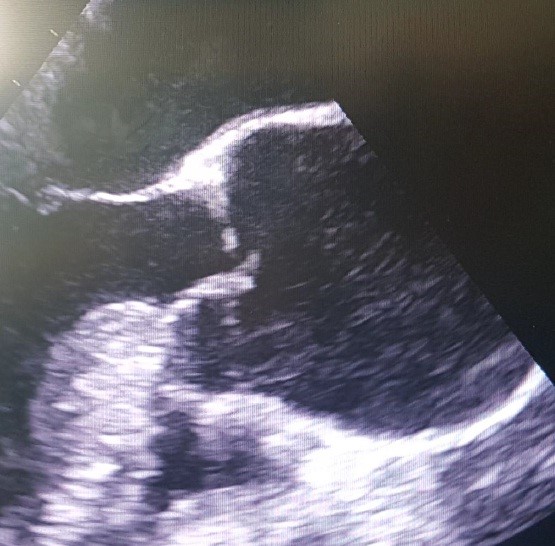 Taking in account clinical and ECG, echocardiographic, angiography and contrast-enhanced MDCT data, patients underwent surgery:  re-implantation of aortic valve –David I procedure under cardiopulmonary bypass, moderate hypothermia and pharmacological and cold cardioplegia (Fig. 5). Intraoperatively: there was marked dilatation of aortic root (Fig. 5A); anomalous origin of RCA from left coronary sinus was confirmed (Fig. 5B); aortic valve was re-implanted in the vascular prosthesis N30, coaptation of aortic valve cusps was satisfactory (Fig. 5C). Coronary arteries ostia were re-implanted in unified block in in prosthesis in the left coronary sinus area (Fig.5D and 5E). Distal anastomosis was performed in the non-dilated part of aorta (Fig. 5F). 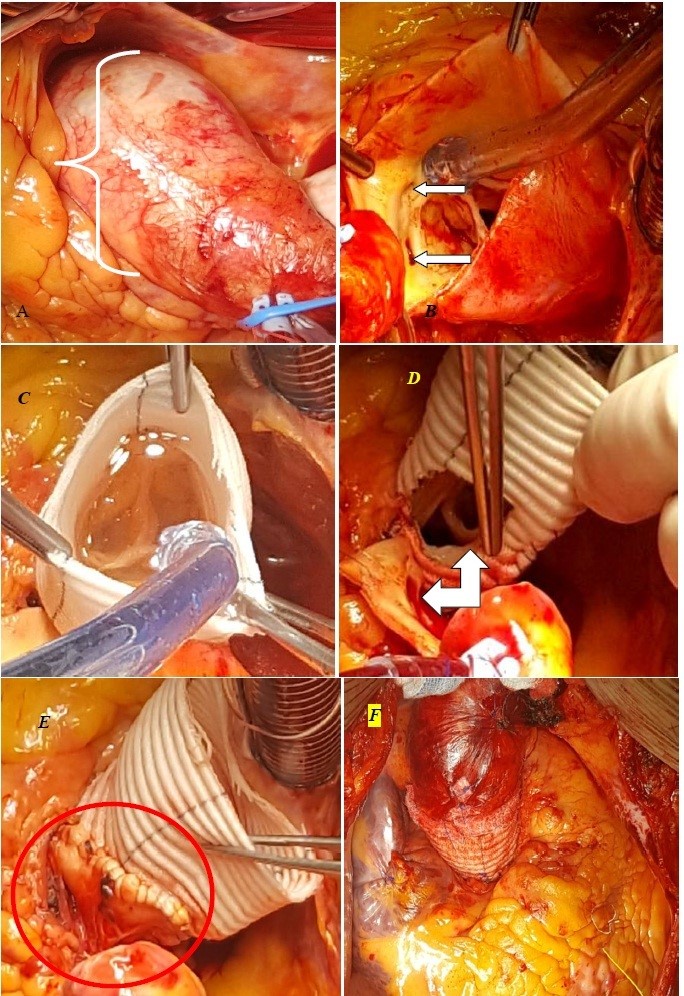 Postoperative period was unremarkable (Fig. 6). ECG – sinus rhythm 65 bpm. Echo – there is no aortic regurgitation, mean gradient is 5 mmHg. LVEDD -6.0 cm, LVESV -4.0 cm. Patient was discharged on the 6th day after surgery in satisfactory condition for the  follow-up by cardiologist. 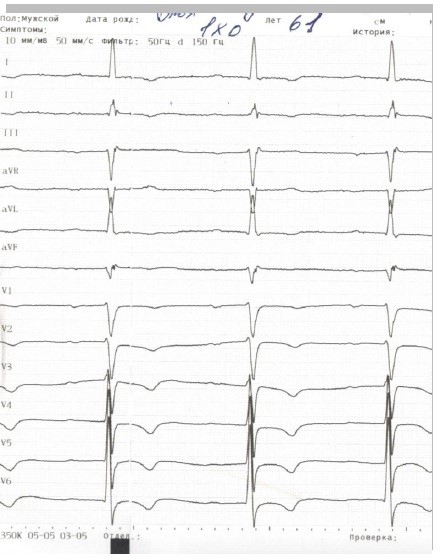 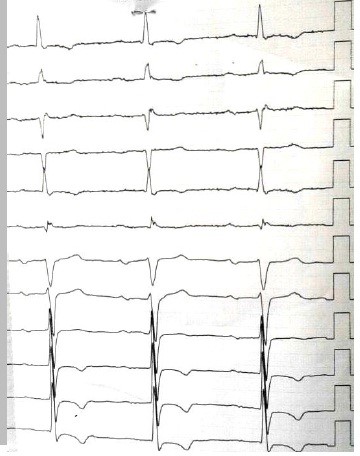 One registry study reported that among 387 sudden deaths among young athletes, 53 (13.7%) were due to coronary anomalies, with majority of anomalous origin from opposite coronary sinus.

Choice of treatment of this coronary anomaly is disputable with some opinions to perform revascularization in all cases. Though coronary bypass surgery (CABG) is a routine type of surgery, it has its own disadvantages. It is known that in young patients with potential long life expectancy, venous grafts are no preferable because of limited long-term patency of the vein. Arterial grafts are not suitable for this kind of surgery and case, because they tend to atrophy and are not developing because of concurred coronary flow, when they are being used for CABG in cases of insignificant stenosis of coronary arteries.

Di Lello et al (9) suggested that translocation RCA to the respective sinus is suitable type of surgery. Rinaldi et al. proposed removal of common wall between RCA and aorta (10).  Wolf et al. (11) in a patient with anomalous origin of left coronary artery performed anatomical correction creating neo-ostium and separating 2 ostia for left and right coronary arteries, and in addition made the left internal mammarian  artery to left anterior descending artery graft. Stenting of anomalous RCA may be very technically difficult with unclear long-term success and is being used only in few centers. In Japan, there is a more conservative approach. Kaku et al (3) included in their study 56 patients with anomalous origin of coronary arteries and treated them with beta-blockers. In their study, patients had low blood pressure and arrhythmias on exertion; however, 5-year mortality was not due to congenital coronary anomaly (3).

In our patient aneurysm of aortic root >5.5 cm and aortic regurgitation +2 were revealed that itself is indication for surgery. Intraoperatively  anomalous origin of RCA from left coronary sinus was confirmed. Due to close position of both coronary arteries` ostia, preserved aortic valve and aneurysm of aortic root we performed reimplantation of aortic  valve by David I with reimplantation of coronary arteries` ostia on common ground on left neosinus. The good coaptation of aortic valve cusps was reached.  There were no stretching and deformation of coronary arteries. This tactics was proven true and we reached an excellent result.

In our case, aneurysm of aortic root and dilatation of sinus of Valsalva produced additional traction and compression of anomalously located RCA. This stimulated development of acute coronary syndrome, which was successfully treated on pre-hospital state.

Ethics: Informed consent was obtained from patient for all procedures